Wrap-Up: Maybe We Can Dismiss This As Parity

Share All sharing options for: Wrap-Up: Maybe We Can Dismiss This As Parity 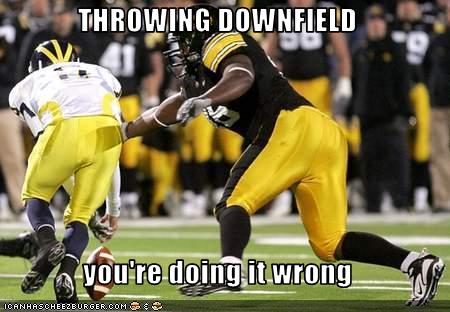 via BHGP: The Pictures

A first drive Stanziball, good for six Michigan points, set the tone early in this one, but Iowa made up for it by harassing Tate and ended his Disneyland start to the season.

Forcier finished 8/19 for just 94 yards, zero TDs and one pick. Denard Robinson entered in relief and led Michigan on a late scoring drive. The eventual pick by the more mobile of the two freshman quarterbacks sent the Mgofans into civil war over RichRod's decision.

But, like, look at Forcier's numbers? They're frickin' awful, and although Robinson is more of a runner and perhaps not fit for a hurried drive, he was averaging a half yard more per rush than Tate was putting up per pass.

And the turnovers: Michigan had five of them, but as BHGP points out:

Ohio State is getting a lot of credit for beating Wisconsin so badly without actually have to do much, but I'm surprised there isn't more of a "dodge a bullet" reaction to this one.

I think if you'd told the Badgers coming in that they would run twice as many plays as Ohio State; gain twice as many yards; force almost as many three-and-outs (six) as they allowed first downs (eight); and hold Terrelle Pryor below 150 yards total offense and pick him off once while limiting the Buckeyes to one offensive touchdown, I think the Badgers would have taken that game.

The short and sweet of it was this: two pick-sixes and a kickoff return were enough to cancel out any advantage Wisconsin might of had in actual offense.

And what is giving me shivers is the realization that this years OSU-PSU game could quite possibly eclipse last year's version in defensive dominance and offensive conservatism.

Ohio State's defense is clearly elite, but there's nothing to suggest that Penn State (when healthy) can't play in stride. That means the game will likely hinge on offensive miscues exploited by the defense. So the bet becomes: who would you take to make the first major mistake, Pryor on the road or Clark at home? If Paterno has more faith in Pryor having success, he needs to takes chances to win.  If Paterno backs his senior quarterback, we're talking 1920s football at its finest.

The wheels have come off, the roof is on fire and the floorboard is wearing thin on the proverbial FAILmobile that is 2009 Illinois Football.  This was supposed to be the year things came together -- strong recruiting, an all-star QB and the return of one of the league's best receivers -- only to have the offense lack momentum in every way.

Zook's decision to pull Juice lasted for about a half when he realized that change is not always good.  McGee was 2/11 with a 2.8 ypa average.  Williams came in and upgraded that average in garbage time: 7/17, 109 yards and a touchdown.

The score was 27-zip with a little over 3 minutes to play.  Michigan State wins big but at a cost: starting RB Glenn Winston is out the rest of the season with a knee injury. 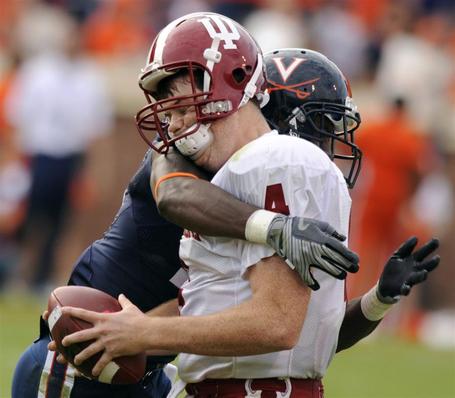 WTF, Indiana?  Virginia came into Bloomington with three losses to non-BCS teams, one of which wasn't even a D1-A squad, and all they did against the Hoosiers was gain 536 yards, pick up 29 first downs, and get running back Mikell Simpson four touchdowns, which is more than he scored all of last season.

Indiana QB Ben Chappell is insisting "that wasn’t our football team," which is probably what I would say too.

You can't ever beat a MAC school by 10 and be happy, but LTP is already deviling into the archives:

The 1983 White Sox called. They want their slogan back. Northwestern's 16-6 win over Miami (OH) today was a thing of ugly.

Yes, it was Miami (OH), but it appears our D is getting the locomotive moving in the right direction. We hit hard. We made plays. We should have had a shutout. But man, was that offensive exhibition God awful. LTP will go in to full breakdown tomorrow, but you don't need to be a rocket scientist to know the offensive playcalling, and thus Mick McCall, gets an "F" grade today.

Even with an OOC schedule that would make Tim Curley blush, they sit at 58th in total offense and 49th in total defense.