Nitt Picks Is Wondering About Iowa

Share All sharing options for: Nitt Picks Is Wondering About Iowa 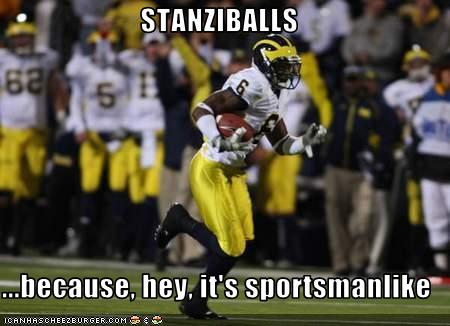 Yes I love these things.

Fun with whatifs.  I hate to even do this, but I got to thinking after this lead in from TDG:

Penn State is halfway through the season sits at 5-1 having beaten nobody significant.

Certainly true, especially with the epic FAIL of Illinois, but like, since BHGP is playing the whatif game (as in: what if Stanzi wasn't Stanzi and didn't throw so many Stanziballs):

In those three games [where Stanzi was being Stanzi], each of whom was an unranked opponent now and at kickoff, the average margin of victory has been five points. Obviously, you can't take points off the board in the middle of the game and expect the rest of it to play out exactly the same, but if Iowa wins all three of those games by an average of 12 points instead, we've got a much better comfort level and maaaaybe a better ranking thus far.

Let's try this on: what if Penn State won that wretched game?  Would we still be considered a team with a good record and no quality wins?  Depends on whether you would say that about Ohio State, because their best win is against Wisconsin.  And guess what:

In other words: Iowa = Wisconsin.

And guess what, they play this week in Madison.  The line?  Wisconsin is favored by three points, which also happens to be the bump for home field advantage.  In other words: Iowa = Wisconsin.

Speaking of mixed emotions.  TNIAAM is a great blog, effing hilarious, but I take no joy in this news:

Syracuse is talkng with Penn State and Miami (as in the U) about future games.

Pressin'. Detailing a Paterno press conference isn't much fun, but luckily there are about two dozen people that do it for us.  Highlights of the highlights:

Joe gave great praise to Bill Kenney, offensive line coach, saying; "I hate to admit that about an Irish guy but that’s what you gotta do once in awhile."

Knowledge Timmons should be OK this week.

Hull is the perfect person to have on this team, good leader, student, solid football player.

Ryan Breen likely will not overtake Colin Wagner as the kickoff man, Joe says he has a great leg but he is too inconsistent.

Here's more if you just can't get enough.

Mumme Poll is out.  Via GTP:

Just to clarify, the mission statement:

The Mumme Poll is an ongoing attempt… to construct a viable method to rank Division 1 college football teams without the bias and potential conflicts of interest that affect other polls, particularly the USA Today Coaches Poll.

The idea would be to let coaches vote this way rather than the traditional method, which would simplify the process, make it more difficult (although probably not impossible) to game, and still produce a sane result.  I find the current Mumme Poll very sane.

I will say this, though: I'm surprised people are willing to give VT, USC and in many ways Oregon a pass on their loss but insist on being stubborn with Iowa.  I'm probably not helping with segments like the one above, but they are undefeated and have a quality win.

In scores of other games.   Rushing plays from the shotgun average more than passing plays?  Bowman on the NFL.