Of Caution, Curley, And Comeuppance

Share All sharing options for: Of Caution, Curley, And Comeuppance

This rambles, but here's a look at our snowy adventure to the game along with commentary about the scene at the game, the arrogance and entitlement of many, and the infinite wisdom (that's right) of Tim Curley.

The story of Saturday's journey from Harrisburg to Winnepeg to Happy Valley.

7:30 a.m. -- Rolled out of Harrisburg with wife and three guests from New Jersey.  We had been harassing these people to come to a Penn State game for the past two years.  They picked this weekend, which was intended to pair up the game on Saturday and Hersheypark In The Dark on Sunday.  Due to the weather, going to the game was an early morning decision which made easier when Tailgate Shogun sent a text saying that the IMPENDING BLIZZARD OF DOOM predicted by AccuWeather had never materialized.  (Note: our collective hats are off to the National Weather Service, which predicted no more than an additional inch of snow on Friday night and Saturday.  As for Accuweather, this is what often happens when weather is forecasted for-profit.  Hype, increased web traffic, and overblown events that never materialize.  And if you're a closet weathergeek like myself, you know that AccuWeather pulls this crap all the time.) 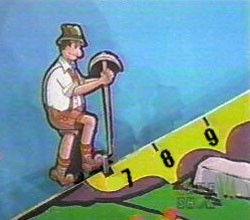 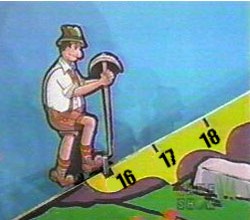 9:00 a.m. -- The long, horrifying climb into the mountains of central Pennsylvania produces a few giant snowflakes, then a few more.  Still, nothing terrible that required any sort of overly cautious driving.

9:02 a.m. -- Holy crap we're going to die, or be forced into cannibalism like that movie, "Alive".  Roads turn awful as we get within 25 miles of State College.  Cars struggling to remain on the road.  Actual picture: 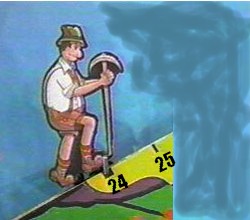 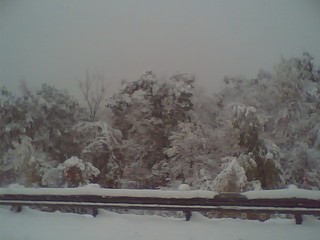 9:45 a.m. -- By the time we reach the top of Seven Mountains, it's a shitshow.  Traffic crawls.  On our descent into Happy Valley, no less than three big rigs heading in the other direction are stuck.  Accidents in both directions tie up General Potter Highway between Boalsburg and the mountains -- we double back a half-mile to Route 144 and cruise into PSU unabated.

10:45 a.m. -- We roll into the Red lot next to the stadium and nobody is there.  And okay, by "nobody", I mean that the lot is approximately 10% full.  The whole scene was rather surreal, and I compared it to when a blizzard hits a city and there's just nothing but quiet in the place of usual chaos.  Only there was no blizzard.  A few occasional raindrops or snowflakes, but that's it.  And the parking lots remained empty throughout the morning.  One of our Jersey friends snapped this picture around noon, about three parking rows from the stadium: 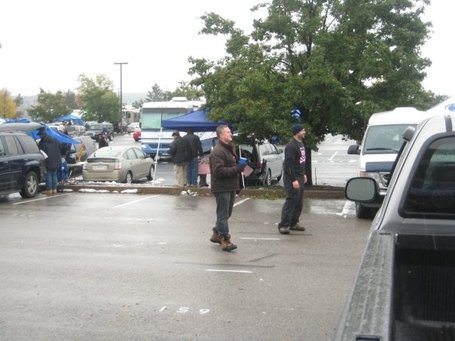 Please note the vast areas of unoccupied pavement.  This made our heated exchange with a guy we'll call Big Time Alumnus even more entertaining.  BTA was angry because he arrived and found me parked in his numbered spot, next to the two other vehicles our tailgating group brought to the game.  He stalked our group for approximately 10 minutes before making his move, angrily giving us the "Do You Know How Much I Pay For THIS Spot?" routine despite the fact that there were no less than 50 open parking spots within spitting distance of where we were standing.  But he wanted his spot.  We calmly explained to him that the rules of the day dictated that after 11:00 a.m., the parking lot was a free-for-all, and THERE ARE OPEN SPOTS EVERYWHERE, DUDE.  Relax, shut up, park your car, and enjoy the fact that you made it to the game in one piece.  But he wanted his spot, because he paid good money for it.  Nobody's impressed with him otherwise, I guess.  Big Time Alumnus, with his foot-stomping, smarmy attitude and old man, elastic waist acid-washed jeans, stormed off saying, "Oh yeah, well I'm going to get the tow truck!"

We never saw him again.  Or the tow truck, which I'm sure had absolutely nothing better to do.  However, I'm totally  stopping by parking space #551 in the Red lot before the Ohio State game and asking that douche if he found the tow truck yet.  The man was incorrigible, and I'm tempted to collect my dogs' poop for the next three weeks just to leave a present for him on the morning of November 7.  I can drive with the windows open.

It was a great time once we got to the stadium.  Tailgating was Spartan*, but still fun.  Even by gametime, the lot wasn't close to being full.  Either were the south end zone seats right before kickoff: 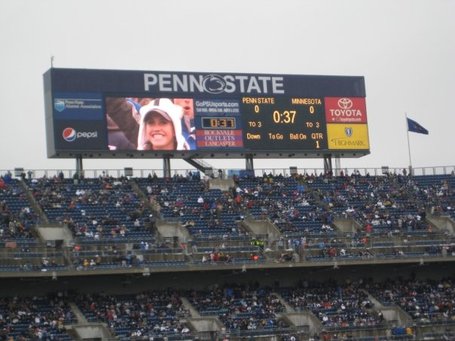 Tickets were available for $10 outside the stadium.  Penn State listed the attendance at 107,981.  I know that's based on how many tickets are sold, but if there were more than 65,000 inside that stadium at any point of the afternoon, I would be shocked.  Even if you bought a ticket for Row 94 in section NEU, you could've made your way down to Joe Paterno's lap by the end of the first quarter.

I don't particularly want to get into the "where were the students?" debate, but...okay, where were they?  It's one thing for people who were snowed in, especially in places like the Poconos and the mountains surrounding State College, but to the best of my knowledge, the vast majority of student season ticket holders are already in State College.  This wasn't a noon start against Eastern Motors or Akron.  It was a 3:30 game against a solid Big Ten opponent.  And this isn't my inner, Future Big Time Alumnus coming out -- I know there are issues with the ticketing system and exchange and swine flu and space herpes and whatever the excuse is this week.  But to keep referring to this group as the best student section in the country is a outright joke, an even bigger fabrication than the "Great Show" moniker that has been shoved down everyone's throat at Beaver Stadium.  Just because Kirk Herbstreit said it once doesn't make it true forever.

I lost count of how many times I've written this, but the Penn State marketing people are still trying to ride the momentum of the 2005 Ohio State game.  Memo to the bells and whistles folks in Happy Valley:  The hyper-marketing campaign has created a gameday environment that is equal parts entitlement and complacency.  2005 is over.  You still have a great product.  Try selling that instead of constantly trying to double down on a completely weird, fantastic, and organic event that took place over four years ago.  You can't fabricate that confluence of events and emotion on a weekly basis.  The events of that night built up over years of losing and weeks of gradual redemption.  You can't recreate it while also promulgating Paternoville by-laws, issuing "official" white-out shirts, and Zombie Nation remixes.  Stop trying so hard.  It's just sad and pathetic.

Besides, it's readily apparent that not even Penn State's own students believe it anymore.  People are numb to the perpetual self-fluffing.  Because of it, large swaths of students take the gameday experience for granted, coasting on the reputation that other people earned for them on a drizzly night in 2005.  And the alumni aren't exempt from this, either, but the rest of the stadium takes its cues from the student section.  Always has, always will.  I hereby request that the university removes "Greatest Student Section In The Country" from the gates leading into the student sections and replaces that text with, "Reasonably Loud Group Of Students When The Game Starts At 3:30 Or Later, The Weather Is Perfect, We're Having A Really Good Season, And Ohio State Or Michigan Is In Town."

However, with respect to Tim Curley and his logistical team, they did a great job getting everything organized in such a short timeframe.  When the decision was made to close the grass parking lots (a good call given the uncertain forecast on Friday and the storm damage that had already occurred in that area), they quickly enlisted the assistance of local businesses and CATA to put together a comprehensive shuttle system.  The police and parking lot attendants were helpful.  Most of the stadium was cleared of snow.  Great performance by those folks.  The athletic department published an open letter from Curley on Monday morning, and for as much as the athletic director gets dumped on by alumni and fans, he and his colleagues came through in a big way.  That letter is pitch-perfect and worth reading, so gradulations to them.  Even if their emergency policies scared off a lot of people and pissed off a few donors (who, again, could have parked practically anywhere in a near-barren lot) the university did what was best for all their fans, not just their wealthiest fans.

With all of this weekend's events finally in the books, what were your experiences?  How were those shuttle buses?  Any rational excuse for the student section?  Were you able to tailgate after all?  Pleased with how PSU handled the parking and weather situation?

* - This does not mean that we cooked a magnificent feast over the course of three hours and proceeded to knock over all the grills and fryers five minutes before we were to eat.