The Story: Zook Gets Desperate

Share All sharing options for: The Story: Zook Gets Desperate

But real quick: There's something called the Mumme Poll, run by two very excellent OMG-SEC bloggers, and you're going to like it because mathematically it works quite different than the typical.  The short and sweet of it is this: voters (lots of voters, and that's why they need you) pick teams in batches.  No pretending to have a reason to rank the 11th team ahead of the 12th, or getting fishy with unprovoked drops of team #2 down below the one loss mid-majors.

It's a really neat concept, and, again: something both different and reasonable.  Register over at the new home and let's have some fun with it.  But remember, you have to vote this week.

A story of Old Money. 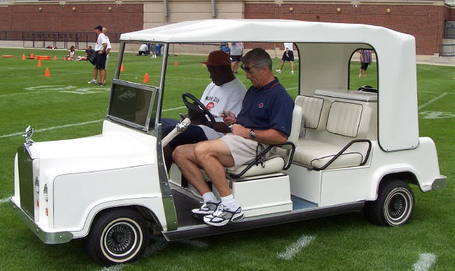 What happened to Good Juice?  He was never one to show up every week, but these first three games have been downright awful.   Zero passing touchdowns, three picks, and ypc average a full yard lower than last year...the rest of it is bad, bad, bad.  He actually improved statistically in 2008 compared to the Rose Bowl season, so why the slow start in 2009?

Movers and shakers.  Vegas put out 'games of the year' odds during the summer and Penn State was favored by just one point.  That line opened this week at 6.  I was terrified; a very large group of other people believe it's way too low:

That's the second time this season Penn State has been (based on these numbers) the most bet-on team in college football.  The line has since moved close to 8, but none of this is comforting.

Denial, I've been there.  But it's never been this bad:

"Little things, a play here or there and we're in that game," defensive tackle Josh Brent said. "Whether media or fans think so, we're in that game with a couple of plays going a different way. ... It was just small things."

Reality can be a tough pill to swallow, but nothing says "yeah we really never had a chance" like getting beat 30-0 against a team that didn't complete a pass in the first half and then decided they simply didn't need to in the second.

Nature of the beast.  I liked it better when everyone was healthy:

Coach Joe Paterno said Thursday on his weekly radio show that he doesn't think Lee will be able to play. Sophomore Nathan Stupar will most likely start.

Paterno says the Nittany Lions will also be without freshman wide receiver and kick returner Devon Smith, who suffered a concussion in last week's game and won't make the trip. Wide receiver Chaz Powell, who also returns kickoffs, has been ill this week.

The Hullstache Grows.  Thanks HnB: 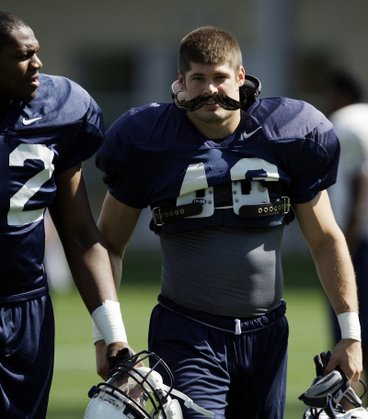