Share All sharing options for: Fear This: Tate Forcier 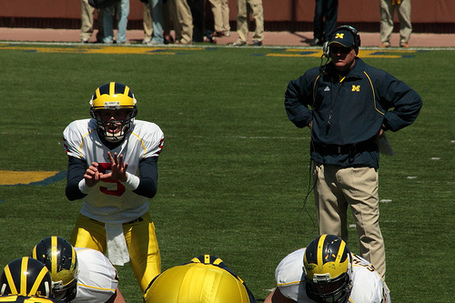 Born, silver Heisman in hand.  Tate Forcier isn't a big dude.  But don't take my word for it, his website qbforce.com has your details:

Tate Forcier was the smallest and the slowest athlete of the three Forcier brothers but always had a bit stronger of an arm and always looking down field to pass first then run.

Which is a nice trait.  He got his nickname, Tate, from a movie about a 7-year-old child prodigy directed by Jodie Foster (I know it's true because I read it on Wiki): 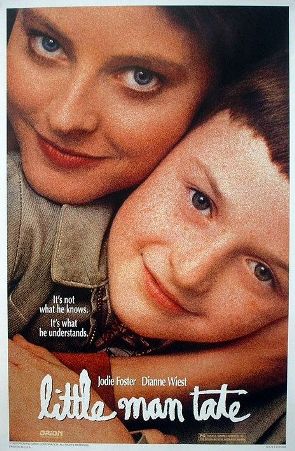 He spent most of his teenage years visiting his football-playing brothers at college, transferring between high schools, and throwing touchdowns.

Forcier was more or less the perfect fit for a Michigan team in desperate need of some immediate modest success.  Michigan lost Newsome, a raw talent with great speed and unpolished skills, for a California blue-blood who was raised by nanny/ex-NFL QB coaches from the age of 4 (or so the historic tales tell).

He came in prepared for college ball and it shows.  Michigan sacrifices some room on the "potential" scale, but that's not as big of a deal when your freshman QB is already at the level Forcier is playing at.

You may remember me from such nature films as Earwigs: Eww! and Man vs. Nature: The Road to Victory.  If there's one thing Michigan fans are good at it's recording every single second of everything that's ever happened to their football team and editing it for the web.

If RichRod ever bolts to implement the read-option in the NFL after a fallout with the UM AD, you can bet your ass there will be a YouTube paper-shredding clip on MGoBlog the morning of.

I don't really feel like putting propaganda on this site from the Mitten State with titles like "The A-maize-ing Tate Forcier" and "Tate Forcier: Weapon of Choice", but there are your links and here's a hockey fight between Tim Leveque Vs. Dominic "The Giant" Forcier: 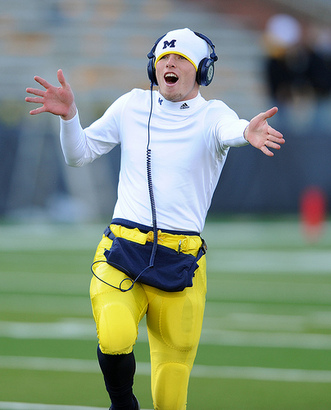 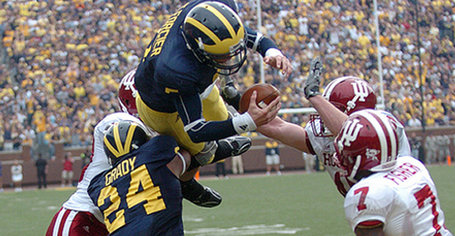 The Penn State Extrapolation.  Forcier is an interesting case because there hasn't been a recent Big Ten quarterback much like him.  He can run, but not quite like Good Juice, a guy Penn State has done well against for three years now (even in the '07 loss: 5.0 ypa passing, 0 TDs, 2 Ints, 37 yards rushing).  Ditto for Pryor last year.

But Forcier isn't really that kind of quarterback because he can throw much more consistently than those guys.  The weird thing is Forcier, despite being a passer, isn't a big fan of the pocket.  While I haven't seen all his snaps (or, really, half of them), he seems to exit the pocket at random and loves to throw rolling to his right.  Keeping him in the pocket might actually hurt his passing, and Penn State might have the front seven to do it.

Fear This?  My official answer is "not enough data to compute," but I think that bodes better for Penn State than Michigan.  His moxie against Notre Dame, Indiana and Michigan State were just what the doctor ordered for a team that was so QB-deprived last year, but the honeymoon ended quickly against Iowa: a horrible 4.95 ypa average and 0/1 ratio...that's a 35.9 QB rating.

His completion percentage had been more or less declining since Notre Dame.  He has been at the center of dramatic scenes, but also has a pick against every BCS program on the schedule.

But Forcier is dangerous because he can sometimes turn it on, and if we see offensive dilly-dally again on offense like we have against Illinois and Minnesota, he'll be in a position at the end of the game to do what he's done 3 times already this season.  An objective man wouldn't be overly concerned, but the (pre-2009) Juice-like swings of this kid, combined with the fact that it is at Michigan, certainly should make you concerned.