Share All sharing options for: Malicious Internet Interrogation With Maize-n-Brew 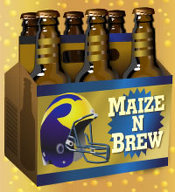 It's Michigan week, so you know what that means. Five days of listening to talk about "streaks" and "WE PWN PENN STATE". As always, we reached out to a Michigan blogger to come sit on the BSD hotseat, and this week our Huckleberry is Dave from Maize-n-Brew. Enjoy, and go check out Maize-n-Brew where I'll answer some questions for Dave later on.

Things started out hot for Rich's boys with that win over Notre Dame. But now they're 1-2 and almost 0-3 in conference play. How has Michigan's season compared to your expectations so far?

Not to toot my own horn too loudly, but the team is exactly where I saw it being. 5-2 heading into the Penn State game. I think the biggest challenge for Michigan fans this season hasn't been getting on the bandwagon, it's been tempering expectations. All of a sudden we've got this score-o-matic offense, and we don't know what to do with ourselves. The offense has been so good we've been willing to say "we'll outscore [the other team]" in every game, totally forgetting that our defense is just as bad as we feared it'd be going into the season. Overall, I think the coaching has been excellent. GERG has fashioned a mediocre defense out of three players (Brandon Graham, Donovan Warren, and Mike Martin), duck tape, and styrofoam. Honestly, I thought the D would be much, much worse than it's performed. Offensively, we're light years ahead of last year, but still in that learning phase. There are still a lot of mistakes on offense and the passing game went backwards the last two games. The offense is better than I thought it'd be, but the team itself is right where I predicted.

Against Iowa, Rodriguez benched Tate Forcier in favor of Denard Robinson and it looked like Forcier wasn't too happy about it. Last week against Delaware State Forcier only played one series. Is there a quarterback controversy brewing?

Mike, when did you start writing for the Detroit Free Press? There is no controversy. Forcier is the starter and got benched at the end of the Iowa game because he was awful. I completely disagree with everyone who bitched and moaned that Forcier should've been back in the game for the last series against Iowa. No. He shouldn't have. Tate was banged up. He was clearly rattled. He had a mild concussion. He was making very, very bad decisions and should've left that game with at least three picks. He needed to be benched at that point. But here's the thing...

He's a freshman. They make mistakes. Look at Tebow, McCoy, Bradford, Henne, Young, or Troy Smith. I'm not comparing Tate to these guys, but I'm naming them to prove a point. As freshmen these uber-quarterbacks made game-costing mistakes. Why? Becuase they're freshmen. Matt Barkley's going to gack one up shortly too. A benching is part of the learning curve and I expect Tate to play much better at home than under the lights at Kinnick. Kinnick does strange things to visiting quarterbacks.. cough... Daryll Clark.... cough.... So, there's really nothing to read into Tate sitting. He needed a week to rest his shoulder. Frankly, Robinson needed the reps because if Tate goes down, Denard's gotta go in. Unless Robinson suddenly, and unexpectedly, becomes a polished passer he's going to be used in a back-up and change of pace role. Tate is the unquestioned starter.

Last year's game between these teams introduced MINOR RAGE into our vocabulary. But Brandon Minor has been banged up off and on this year. Is he healthy for this game? And are there any other injuries of note?

Minor should start this game and is, by all accounts, as healthy as he's been since fall camp started. Sitting the last few games and limited practice has allowed his injured ankle to heal (at least Michigan fans hope so). That's good news for us, bad for you. Against Iowa, Minor had plenty of power and steamrolled several Hawkeye defenders en route to an excellent, yet limited game. As with all ankle injuries, you're fine until you have to make a cut. That was the big difference two weeks ago, he couldn't really do that. Two more weeks to heal? I think he'll be cutting fine and will be one of the keys to the game. Likewise, Carlos Brown should be back in the backfield along side Minor. Brown suffered a concussion in practice two weeks ago and should be fine for Saturday's game. Another huge return will be Center David Molk, who has been ouot since the Indiana game after suffering a broken foot against EMU. Molk is the heart and soul of our offensive line, so if he's able to play, it'll be a huge boost for the team. The downside is he's had a week to practice, so he might not be at 100%. On the defensive side of the ball, Michigan will again be without sophomore cornerback Boubacar Cissoko who has been suspended indefinitely for various violations of team rules (including academics). Rodrgiuez has said that the team is monitoring Cissoko, and it is up to him whether he's going to put in the work to get back on the field.

That Michigan defense...I dunno, man. They made Jimmy Clausen look like a Heisman contender. And Indiana rushed for almost 200 yards. Is it Greg Robinson and the coaching scheme? Is it an issue of talent level? Is it injuries? What does Michigan have to do to get better?

It's a talent issue. Michigan is simply barren at linebacker and empty in the secondary after Warren. Personally, as stated previously, I think GERG has done an excellent job with this group. Look at the defensive line. I thought we were toast at DT after Mike Martin, and GERG has turned Greg Banks and Renaldo Sagesse into prominent contributors. Look at Stevie Brown, a year removed from being the player most likely to allow a 70 yard touchdown, he's our best linebacker and should at least get consideration for All Big Ten Honorable mention. Michigan's defense plays very hard and is very young, but the youth in the secondary and the constant stream of mistakes out of veterans Obi Ezeh and Jonas Mouton (who really, really should be better than he's playing and I can't figure out why he isn't) at linebacker are consistenly breaking down on third and long. Hence, the issues on D. If you're looking for an achilles, it's linebackers or safeties covering Tight Ends. Iowa smoked us on that. Coverage on the play fake or the TE going into the flats has been terrible, and it's just a reaction thing. The players have to identify that better and simply haven't. Better players over the next few years will fix that, but it's something Michigan fans just have to deal with this season and next.

I'm assuming you've watched a Penn State game or two this year. Where do you think the Wolverines can exploit them?

You know, I'm not really sure on this one. I feel the Penn State secondary isn't quite up to snuff and the DE's are a tad weaker than they've been in recent years. Plus, if Sean Lee's out this week, bonus. In the running game I think Michigan has to attack the edges quickly and someone has to get out on Bowman immediately. Michigan possesses a quick, strong and athletic offensive line, so I think they can attack the edges with the read option. Up the gut? Not so much. I was very impressed by PSU's Defensive Tackles. In the passing game, I see a lot of Tight End Kevin Koger both as a viable pass option and as a decoy. Of the linebacking group, I'm not sure who will be covering him. But with Koger in the pattern or as a decoy/blocker it means one less linebacker at the edge to deal with. I think Koger is probably the #2 or #3 TE in the conference pass catching and blocking, so he'll play a big role. Next, look for Stonum and Hemingway to get deep on Penn State's corners and safeties. That'll open things up in the middle and may, by themselves, be open for some deep bombs.

I'm sure you're wondering why I haven't said "w00t we'llz 0wnz0rz da PSU Offensive Line!" Well, our pass rush hasn't been great outside of Brandon Graham and teams have been running very, very well against us. So, I think that match up is a push.

On the flip side, what scares you to death about this Penn State team?

The Linebackers, the Defensive Tackles and Evan Royster. Really. I've never been a big fan of Daryll Clark's. Mostly because he's shown a propensity for gacking up games against good competition. Interceptions. Fumbles. Bad reads. But Royster scares the shit out of me. On defense, Michigan's running game depends on neutralizing the center of the Defensive front and getting to the backers. I just don't see that happening consistently against Bowman and company. We'll have some great gainers, but I'll be surprised if Michigan can do it consistently.

Care to make a prediction? The Nittany Lions of BSD could use some red meat.

mmmmm..... red meat..... That makes me hungry. Think I'll order a cheese steak from Mr. Spots with chili cheese fries. mmmmmm.....  What were we talking about? Oh yeah. Predictions. Back in May I predicted this one to be a Penn State victory. On paper, it should be. But Michigan's glorified scrimage against Delaware State gave the Wolverines an extra week of practice and allowed their starters to get healthy. Something Michigan was not able to do in previous years. I still hate the concept of a D1-AA opponent anywhere on the schedule, but the timing of the "bye" is really beneficial to Michigan this year. I think Michigan wins this in a close game. I could be wrong, probably am, but a year removed from 3-9 and sitting at 5-2, I'm playing with house money.