Wrap-Up: And Then There Were Three

Share All sharing options for: Wrap-Up: And Then There Were Three

Penn State's chances of sole possession of the Big Ten crown (or as we've been calling it since 2005: actually winning the conference) fell well below 1% last night when Ricky Stanzi threw a game winning touchdown pass with just 2 seconds on the clock.

It was a true defensive slugfest for over 50 minutes. Up until the drive that gave Iowa a 9-6 lead, the two teams combined for just one drive over 70 yards, just two drives over 50 yards.

And I can't find out why this happened: after Iowa scored the winning touchdown with no time on the clock, they were forced to "attempt" the extra point.  They did the obvious thing and took a knee, but since when do they require this? The only thing I can think of, and I'm all speculation here (none of the beat stories I've found address this): Dantonio demanded it. Score another one for the sore loser?

Iowa will finish with Indiana, Northwestern, Ohio State and Minnesota. The chances of them falling twice in those four games is low; Iowa fans can officially begin to worry about being shut out if Texas and Floribama win out.

The sky was falling in the state of Ohio last week and everyone was ready to send super-recruit Pryor back to wherever he came from.

But the preseason offensive player of the year rebounded from his four-turnover performance against Purdue to demolish a Gopher team that is heading 100 MPH towards the bottom of the Big Ten standings. It didn't help UM moral when the only standout on the team, Eric Decker, went out early in the game with an ankle injury.

It was a slow start for the Buckeyes but they finished strong -- over 500 yards of offense, 5.5 yard per rush and a 4-1 turnover ratio. Pryor led the team in rushing with over 100 yards and had another 239 through the air to wide-frickin-open receivers.

The Ohio State defense is the real deal, however, and they have been most of the season.

Ohio State is very much still in control of their destiny...winning out puts them in the Rose Bowl and they get Iowa at home. 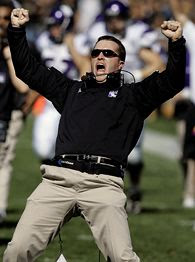 Indiana reaches a new painful low. Up 28-3 with 7:31 to go in the 1st half, they gave up 26 unanswered points until they were faced with 21 seconds on the clock and a 59-yard field goal for the win.  What really hurts is that they almost made it, the kick was solid and on line, but fell three or four yards short.

But my favorite part of the game? Definitely Pat Fitzgerald's post game interview in which he enlightened us with something like, "There are three kinds of people in the world," and then went right along and explained to us what none of them are. I love when football gets philosophical.

The Hoosiers went 3-1 with a softer non-con schedule than Penn State (including a blowout loss to hapless Virginia) but now have their second heartbreaking loss of the Big Ten schedule.

They need two more wins against Wisconsin, Penn State and Purdue or it's nothing but Rotel for December.

Two teams with four wins between them faced off in a game that was forgettable and difficult to watch. Purdue jumped out to an early lead, outgained Illinois by 60 yards and avoided a letdown after the big win last week against Ohio State.

I'm now kicking myself every week for thinking Illinois would be competent this season. Williams went 9 for 18 with a pick, rushed for just 38 yards on 14 carries, and ended up getting benched for someone named Jacob Charest.

They've lost five in a row and haven't scored over 17 points all season. I don't know how Zook can keep his job (update: but he will). 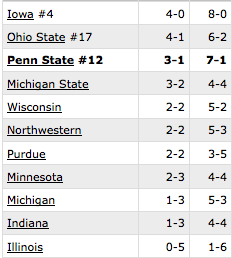 Iowa has already bested MSU and Wisconsin, so only if the Hawkeyes somehow fall three times in the next four weeks do those teams have a chance. In other words, they don't have a chance.

So it's now a three-horse race, although only Iowa and Ohio State control their own destinies. Penn State can win a Buckeye Crown(R) with a win against Ohio State and a Hawkeye loss to Tressel the following week.