It's Monday, which marks the beginning of Eastern Illinois Hate Week.  Just to remind you: Eastern Illinois is venturing into Penn State and looking for an upset.  They see a PSU squad that lost to Iowa, only led Illinois by 4 at half, and think they can go Appalachian State on us.  They think they can walk into Happy Valley and pull a fast one on JoePa and the boyz, and put us on their Ohio Valley Conference mantel.  Can you feel the hate? 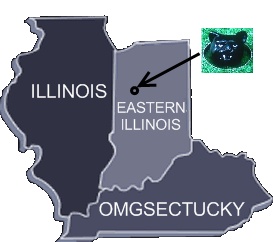 WHO: Eastern Illinois--commonly referred to as "Indiana"--ventures into Penn State this Saturday. Eastern Illinois is (thanks Tim) the first ranked team that Penn State has faced this season.  The Sex Panthers are currently ranked #25 in the FCS polls after dropping their last game against the Eastern Kentucky NotHilltoppers--totally screwing our strength of schedule after this game.  As if they couldn't pull one out on Family Weekend against EKU? I guess the players were looking forward to "Unrepentant Spousal Affairs Weekend" later this season against UT-Martin.  One assumes that they are fighting this week to remain in the FCS Top 25, but no one cares.  Tennessee Tech got blasted 49-7 by Kansas State two weeks ago and still got a vote, so I don't even know if a loss to an FBS school even matters in their rankings.  Being an FCS squad is like being the Sun Belt Champion, who cares when you already have 3 non-con losses against BCS opposition? 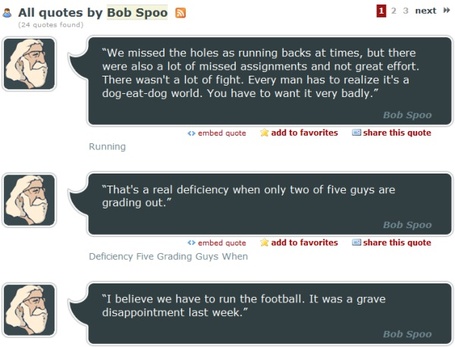 I Am Not Making These Up.
Source: http://www.quotesdaddy.com/author/Bob+Spoo

WHAT: This game features two of the longest tenured coaches in their respective subdivisions in Joe Paterno and Bob Spoo.  Even though Paterno had already won two national championships by the time Spoo started coaching in 1987.  And even though Spoo didn't coach in 2006--like we're supposed to look past that.  And I guess we're supposed to be impressed that this guy has spent twenty-odd years dinking around in I-AA?  As if that's supposed to be endearing.  Either the guy never got a shot at the big time or he was a big fat wuss and never ventured beyond the confines of a no-name directional school.  With an all-time record of 127-102-1, you be the judge.

WHERE: Fittingly, the game will be televised on ESPN Classic.  ESPN presupposes that this game will be a classic that is to be beheld for all time--hopefully in the NCAA Hall of Fame in South Bend Atlanta.  This leads to one of only three possible Classic outcomes:

Again, you be the judge. 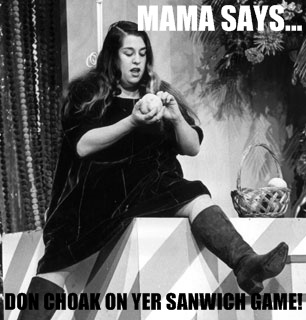 WHEN: High noon.  Actually 12:05 according to AD's webpage.  Also provided you're on the east coast. The EIU Sex Panthers are the second opponent in the Illinois Swing™ of Illinois, Eastern Illinois, and Northwestern for Penn State in the month of October. It is also smack dab in the middle of the Big Ten conference season.  This is the quintessential sandwich game, and one that Penn State has everything to lose and nothing to gain by playing at this time.  Once again: thanks Tim. 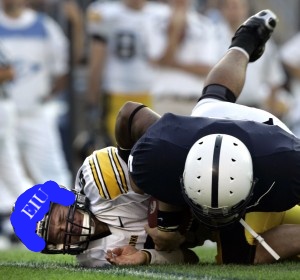 WHY: Jake F'ing Christensen.  Remember him? He also goes by the name "The Only Guy Who Made M*r*ll* Look Good."  I mean--I don't want to mierda on Anthony's cabeza, but the single win over Iowa this decade was with Morelli at the helm?  A lovely description of the game from wiki:

Quarterback Anthony Morelli overcame first-half boos from the Beaver Stadium crowd to finish 18 of 31 for 233 yards and a touchdown in a 27-7 win over the Hawkeyes.

Well, that pretty much sums it up in a fine ol' nutshell. Thanks, Wiki.  Do you realize I would switch the result of every game against Iowa this decade and not regret the loss of the 2007 game one bit? That whenever I bring up this game with Iowa fans the conversation goes like this:

Me: (irritated and unable to respond)

So what does this Christensen guy do??? Instead of murdering Ferentz' reputation to the fullest, he transfers out and lets Stanzi murder us with his patented OneShiningMomentBall throws against Penn State.  Yeah, thanks bunches, Jake. Thanks for the memories, pal.

But does he leave us alone?  Nooo... NOOOO!!!! He has to find his way on the schedule again by joining the Sex Panthers and sneaking on the Illinois Swing™! Why won't he leave us?  We know he brings nothing to the table, we saw it back in twenty-ought-seven, why come to us again? LET US BE!!!!!!!!11 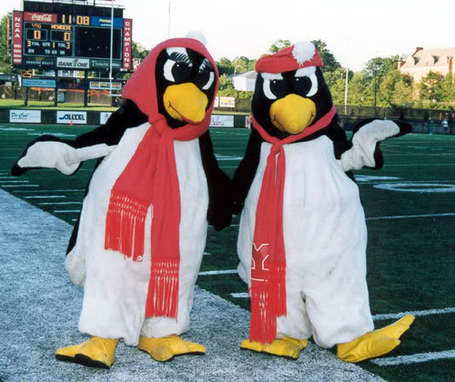 FactFoto: Picture of the EIU mascot.  I think.  I dunno, all FCS teams look the same.

So, in closing we're facing a school that wishes it was Indiana, with a knock-kneed coach, of a classic level of suckitude, that offers PSU no positives benefits, all quarterbacked by a guy that reminds of Iowa.