Share All sharing options for: Nitt Picks Is Tired Of Eating Dessert First

It's Recruiting News, But Maybe More.  Mike Thornton out of Georgia is rated the 10th best defensive tackle in the country. The local press caught up with him:

Generally the battle for Stephenson defensive tackle Mike Thornton is thought be between Georgia and Auburn. But I’ve long said not to discount Penn State in the battle for the state’s top uncommitted senior defensive lineman. Sure enough, Thornton told me this week that Penn State is "pretty much" his favorite. The 6-foot-2, 280-pounder plans to make an official visit with the Nittany Lions the weekend of Nov. 7 when they play host to Ohio State.

Which alright I'll believe it when it's siren'd, but this is interesting:

Thornton said the same thing to PalmettoSports.com, which covers South Carolina recruiting, earlier this week. "They’ve got a good coaching staff that is going to be there for a while and they’re a good team," Thornton said. "They’re probably my favorite right now."

Now that Paterno is the undisputed king of the ring again, is he really going to be there another 5 years?  Someone apparently thinks so. 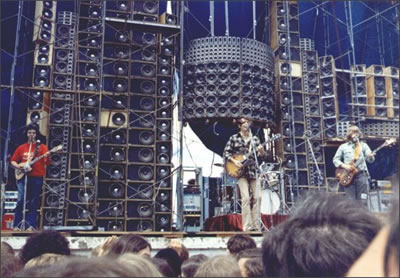 The Grateful Dead Would Be Proud.  For all the negative press Penn State got out of L.A. last winter, it's interesting that they're helping us spread the good word (with the help of a Penn State engineering student, of course):

Engineers in Penn State's graduate program in acoustics are measuring the sound generated by the crowd at the Nittany Lions' home field, Beaver Stadium. At points during the game, the sound levels reached 110 decibels.

Andrew Barnard, a senior research assistant at the Applied Research Laboratory, told the Penn State Daily Collegian, "You know if you're at a rock concert? If you're standing right in front of the speakers -- that's how loud 110 decibels is."

But Mostly Bad Sports Writing. I've mellowed in my fight against insanity via newspaper print, maybe I realized it's a mountain too tall to climb, but, honestly, things like this actually make us all dumber:

The Michigan State Spartans are a dismal 2-3 overall and 1-1 in the Big Ten — and may have the conference right where they want it.

Consider: When the Spartans finish the month of September with one league win, when they also face Michigan in the fifth game on the schedule and win that game, good things have followed.

It was the same unlikely scenario for the program's last three Big Ten titles.

He goes on to talk about how this happened once 30 years ago and, under the same conditions, MSU beat Michigan by one point in 1990 to earn a 1/4th share of the Big Ten title (isn't is great when 40% of the conference gets to print t-shirts?).

You don't get beat up by a mediocre Wisconsin team, survive against Michigan because they out-Sparty'd you, and then wake up on Monday and pretend everything is going according to plan.

"So you go right down the list. We've had one loss by four points on the road with 11 seconds to go in the game. So the flipside of it, we're 11 seconds away from being undefeated right now. I think if you really study the polls, you really have to study which teams that are there and who they played and how they played. If you compare apples to apples, I think that we deserve to be there right with everybody else."

That's right, folks, Notre Dame just can't get a fair shake!  And to play The Mighty Ducks hear for a second, isn't Notre Dame also something like 90 seconds away from being 1-4?

I Still Don't Like The Whites. Numbers don't lie, right? 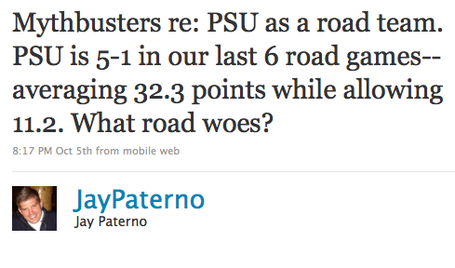 In Scores Of Other Games.  Good news for everyone involved in this....Penn State is projected to sit at or around 15 in the "current" BCS standings.