Share All sharing options for: The Still Life Takes Its Happy Pills

[Once again brought to you by Carolinaeasy The Great. --KHD]

Welcome back BSDers to another installment of The Still Life. Those of you who have made the Still Life a part of your BSD experience may recall that last week I was a bit depressed.  Well it is a new week and following a satisfying victory over Illinois the Still Life is taking a positive approach to this week's installment. There were plenty of positive plays to choose from but one play in particular has got the Nittany Nation, and indeed the Czar of said nation, in a tizzy this week: the long run in the second half by Darryl Clark. 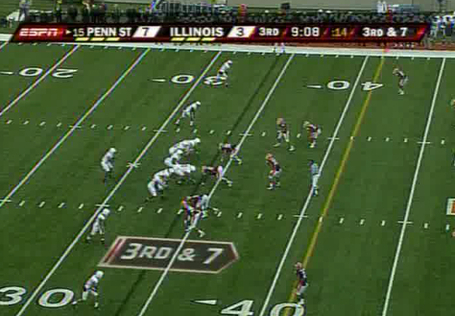 Pre Snap Read:  Here we can see the pre snap alignment of both teams. PSU has come out in a spread look the Split End and running back on the bottom of the screen, the tight end and two flankers at the top of the screen, and Clark is in gun with no running backs.. The Strength of the Lions formation is to the top of the screen.  The Illini come out in a 3-3-5 defense. Which in layman's terms means three defensive lineman, three linebackers, and 5 defensive backs are on the field. This is common defense being employed to slow down spread attacks. It works because it gets you enough defensive backs to stop the passing game, but it usually leaves big running lanes.  At the bottom of the screen you can see they have walked up their OLB to blitz off the weak side edge. 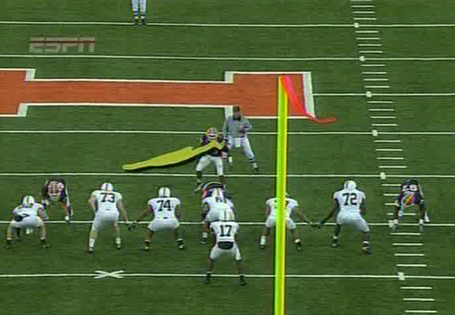 Clark's Pre Snap View: In this picture we can see what Clark and the offensive line are seeing. Clearly there is a big advantage here. Penn State has a seven on four advantage (keep in mind the walked up OLB just off the right edge of this picture) for the first 15 yards in view. At this point the Spread HD has done what it is supposed to do, spread the defense. The throwing threat posed by Clark is causing the defense to spread this far, and now the running game is ready to roll. 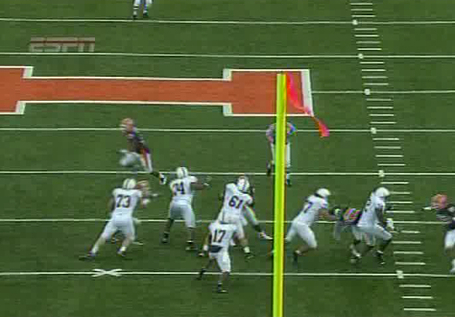 Snap of the Football: The offensive line looks like they are going into a slide protection. The defense is clearly in a pass rush mode as they are flying up field. There is a white hat on every orange hat, and a few extra white hats to spare. Clark takes a drop step here to help sell the pass. 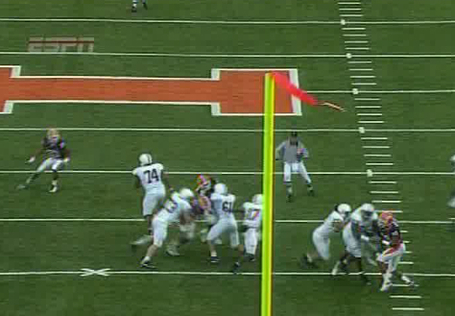 Take Off:  Here we can see the draw develop. Landolt and Wisniewski crash their two defensive lineman into one another, and Troutman climbs up to a linebacker who has his eyes and hips to the outside. McCormack and Eliades are walling their defensive lineman to the outside. The reason Eliades does not climb is because of the blitzing OLB. If he was sitting at normal linebacker depth Eliades would most likely climb. In this case the Illini will blitz right out of the play, which makes it an easier run. Notice that the closest defender past the defensive lineman is the free saftey who is 27 yards away from the ball at this point. 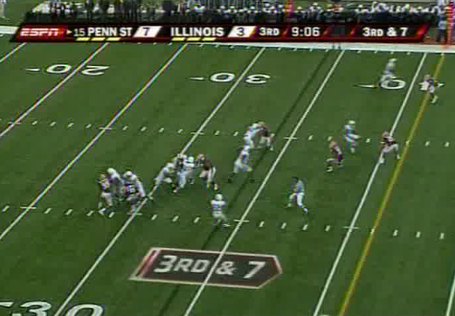 Coverage Look: Here is essentially the same moment as the picture above. The Defensive backs are dropping into Cover 3 and running way down field because of the routes being run by the receivers take them there.  Because of the strength of the Lions pre snap formation there are no defenders to the bottom of the screen. Royster is sitting in the middle waiting to wall off any defender scraping over the top of the play. 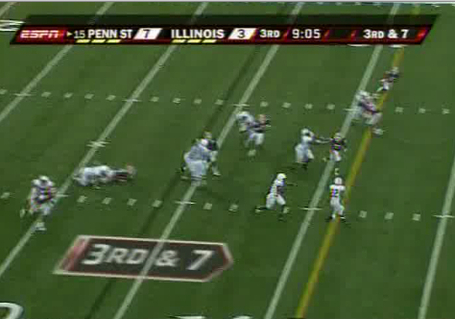 Breaking It: Now we can see Clark approaching the first down, and the utter lack of defense here by the Illini. Royster is still sitting over the middle but is realizing that the linebacker poses little threat to Clark because of the great job Troutman and the formation did on getting him out of the play. This play is now an explosive 25+ play for PSU. 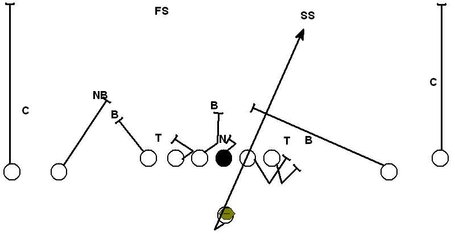 Here is a Draw up of the play.

You know the rest: Clark runs for 50 yard run and sets up a PSU score. What made this play so successful was a good call by the PSU offense, coupled with a fortunate blitz that took the only defender who could have really prevented this run out of the play. The threat of PSU's passing game, and the lack of QB runs up to this point in the season have spread the defense out to cover the pass. If PSU can continue to pass, these easy big runs will be there for Clark as the season progresses. This is a run that was clearly set up by the pass. Great job by all parties involved. This is what happens when everyone is clicking on a play, including the coaching staff.