2,710 Calories Of Mediocrity May Have To Wait

Share All sharing options for: 2,710 Calories Of Mediocrity May Have To Wait 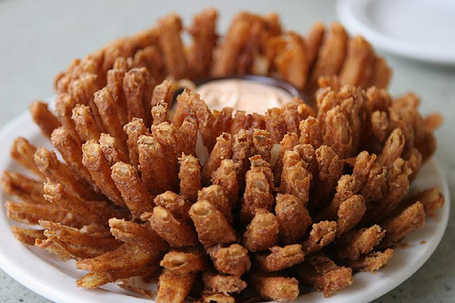 Don't call the cardiologist quite yet.

After a few days of OMG WE'RE GOING TO THE ALAMO BOWL, it's time to take a look at reality. And while reality may be a traffic cone or a stop sign that can't block Cam Heyward, it also tells us that Penn State's BCS hopes aren't quite dead yet:

Can’t believe it’s true? Oh, it’s true. With Notre Dame slumped out of the picture by virtue of its home loss to Navy, your Nittany Lions are still very much a candidate for one of the four major bowls that surround the crown of the BCS championship game.

They might need some help. Or they might not. Either way, if the Lions merely take care of business against a pair of pedestrian Big Ten opponents, they are still prime candidates for at-large spots in either the Orange or Fiesta bowls.

Yes, we’re talking about the Lions being chosen over an unbeaten Boise State ranked in the top six in the BCS’ own ratings system. As it stands, nothing behooves a BCS bowl to take the Broncos. And for all the attention their wondrous upset of Oklahoma got three years ago in the Fiesta, the TV ratings for the game stank.

Yes, we mean the Lions would without question be chosen over a 1-loss Cincinnati, a 1-loss TCU and very probably a 2-loss Iowa.

A look at the current BCS standings shows that Penn State is in a decent stalking position:

Remember, the key is getting into the top 14. The Iowa-Ohio State loser likely tumbles out after Saturday. Pitt's remaining schedule is Notre Dame, @WVU, and Cincinnati. Utah plays @TCU, SDSU, and the Holy War @BYU. Even Cincy isn't out of the woods yet -- they have games against WVU, oddly resurgent Illinois, and a visit to Pitt. Arizona's remaining schedule is downright murderous (@Cal, Oregon, @ASU, USC). They'll be long gone by Selection Day, but if they happen to win out, Oregon and/or USC may be gone.

For once, there's an advantage to the Big Ten schedule ending in mid-November. Penn State just has to win their last two games and hope that the BCS field comes back to them. Does Penn State deserve to be in a BCS bowl game? No. Will it result in a horribly lopsided matchup, and bump up the competition for the rest of the Big Ten's bowl matchups? Yeah, probably. Does such a scenario cause ESPN talking heads to explode in outrage due to Penn State's soft schedule and a non-AQ school like Boise getting screwed? Oh, hell yes. But with hundreds of thousands of overzealous and free-spending fans, we remain an attractive choice for Orange and Fiesta bowl officials who need to move tickets and trinkets. For better or worse.