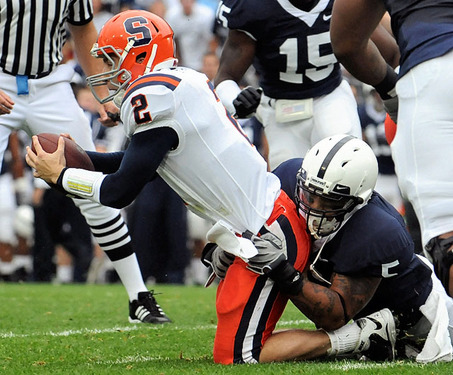 Hayes x6? Hayes may ask for a sixth year:

Given his unfortunate circumstances, Hayes, a fifth-year senior, said he would consider asking the NCAA for a sixth-year of eligibility once the regular season ends on Nov. 21 at Michigan State.

"It's definitely something that I will talk to with my parents and I will talk to Coach Paterno about after the season," Hayes said Wednesday. "But with how we're feeling right now, we just really wanna focus on these next couple of games and hopefully [during] the time period we get before the bowl game, we'll be able to sit down and speak to Coach about that."

No injury has bothered me more than the second one Hayes suffered.  If anyone deserves a break, it's this guy.

Then who will throw the Stanziballs?  The gunslinging leader of Iowa is out until bowl season, and you know what that means: your Vegas line has moved from 13 all the way up to 17.  This is the same line we saw when Minnesota visited The Shoe.  Take what you want from that news.

The Penn State line might be stranger, though.  It opened at 21, no one had regular season ending surgery, and it jumped all the way up to Penn State as a 26-point favorite.  Feel free to guess why in the comments; I have no idea.

About Wisconsin.  I'll admit it, they snuck up on me too.  Rittenberg power ranks:

T-3. Wisconsin (7-2, 4-2): Is there a more under-the-radar 7-2 team than Wisconsin? The Badgers quietly keep winning, though Saturday's game against Indiana got pretty interesting down the stretch. Freshman running back Montee Ball really picked up teammate John Clay (concussion), and the Badgers' ground attack surged yet again. Wisconsin remains in good shape for a 10-2 season.

T-3. Penn State (8-2, 4-2): Because of a soft schedule, Penn State had only two chances for signature wins this season and it failed on both. Despite getting both Iowa and Penn State at Beaver Stadium, the Nittany Lions couldn't generate much offense and endured surprising breakdowns on special teams. Penn State could have seen its chances for a BCS at-large berth vanish after Saturday's poor performance.

I'm pretty sure Wisconsin and Penn State play, boiled down, the exact same schedule.  As has been noted by the chicken littles around these parts, Penn State did blow their two shots at elite teams.  But guess what: Wisconsin has the same exact two losses.  That sentence in bold is as true about Wisconsin as it is about Penn State.

Wisconsin still has Northwestern and we've still got Michigan State, so this may all be moot, but I don't see the case for Wisconsin over Penn State.

All I heard was Dick Vitale using way too much alliteration.  Curley's brother (long lost, at least) appears to be running the IU athletic department, and guess who is getting ready to start a firetimcurleyslonglostbrother.com site (domain still available!)?

The Indiana University Athletics Department is seeking names for the student section in Assembly Hall. The student's selection will be placed on the front of the Crimson Club Student Basketball Shirt. These shirts will be handed out to all student basketball season ticket holders. The student t-shirt is a great way for the students to show their passion and pride for Indiana Basketball at every home game.

And you know why?  Because just showing their passion and pride at Indiana basketball games simply isn't enough.  We know the drill, and CQ knows the feeling:

I loathe the Duke-ification of college basketball student sections: the oh-so-clever names, the overly contrived chants, the painstakingly researched "jeer cards," the stupid left-right-sit-down thing that every school thinks it invented, and so on.

And yes, get off my lawn.

(For the underpaid mercenary soldiers of BSD: Suggestions can be sent to SPTMARKT@indiana.edu )

In scores of other games.  TNIAAM has The Man's doomsday bowl projections...Rupert Murdoch is an idiot and also comfortably confident that fair use is rubbish and illegal...and OMG BLOGFIGHT BHGP and (surprise!) an OSU blog.