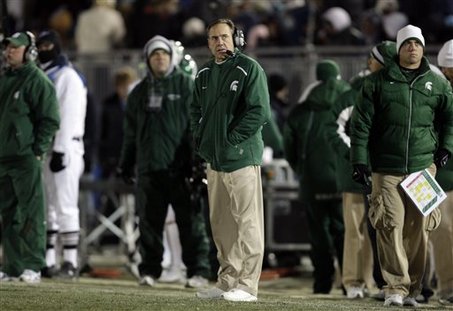 Mark Dantonio, looking at the scoreboard to make sure he has no timeouts remaining. (AP Photo)

Nothing hurts more than the truth, and nothing says truth like charts.

Something I was interested in: just how true is the Spartan Slide? Sure they've blown monster leads against mediocre teams and lost to MAC schools, but that's early season stuff. How did John L. Smith earn such a fantastic reputation for late season collapse? 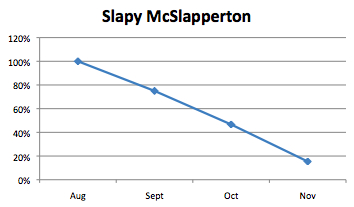 (This right after a blocked FG was returned for a touchdown, for
those of you who may have forgot, which is none of you.)

So, forced to pick up the pieces, the Spartans poached one of the nation's finest from Cincinnati, Mark Dantonio.  I mean you're never going to get a guy better than 18-17 at a just barely Big East school, right?

Cincinnati has been devastated by this; all they've been able to manage since Dantonio's departure is a BCS bid and total control of the Big East so far this season.

I'm disappointed to report, however, that with an admittedly limited sample size, there has been a bit of a culture shift in Left Directional Lansing: 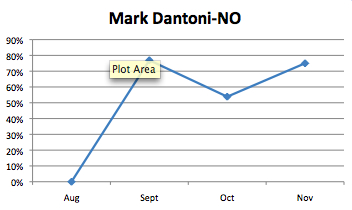 Mediocrity has a way of making trends less interesting, but these are the trade-offs we're forced to pick between when onside kick bliss double-timeout lameness are on the table.