Share All sharing options for: Malicious Internet Interrogation, Part Two: The Only Colors 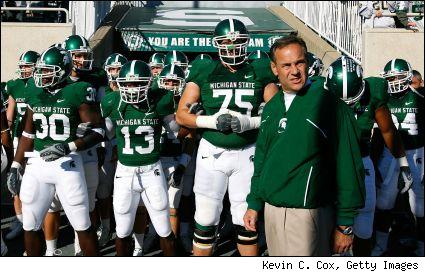 1.  If you were selling the Land Grant Trophy at a garage sale, what price would you put on the sticker?

I know that the strictures of blogging require me to say "i shud totes pay them 2 take it away, lololol," but really, I think there's a lot of value packed inside that beauty.  You've got the exquisite mahogany frame (excellent as a replacement coffee table leg in a pinch), two bonus paperweights, fine campus art, that little plaque under the lion that looks sort of like a double light switch, and who couldn't use an impressive-looking trophy-action-guy to put on the ol' mantle?  Seriously, you could furnish an entire apartment with this thing. 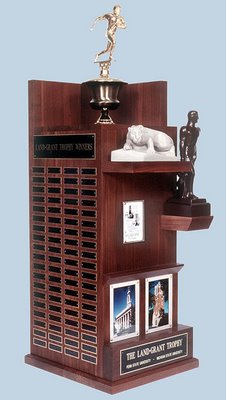 Functional, but only when dismantled into 20 pieces.

2.  Penn State's defensive weakness is against the pass, especially crossing routes in the middle of the field.  Your guys aren't going to be total jerks and try stuff like that, right?

Of course not!  Because if we've learned anything from the past few years, it's that Mark Dantonio will go to great lengths to appease opposing fans.

In all seriousness: yeah, that's probably exactly what we're going to do.  Blair White is excellent from the slot, and although he had a relatively quiet week against Purdue, he did score a huge 4th quarter touchdown on--you guessed it--a shallow crossing route in the middle of the field.  We've also got B.J. Cunningham, Mark Dell, and two tight ends (Charlie Gantt and Brian Linthicum) who are proficient at that sort of thing.  Cunningham, White, and Keshawn Martin are each also serious deep threats.  If we don't get a whole lot of production from them collectively, Penn State wins.

3.  PSU's special teams are bad.  And by "bad", I mean "run away from the television while sobbing uncontrollably."  Michigan State ranks 7th nationally in kickoff returns and has the best placekicker in the conference.  Is there any part of special teams where Penn State might have an advantage?


The only area where we've been at least semi-weak is on kickoff coverage.  Swenson is an excellent kicker, but he's very average at kickoffs; most teams have been able to return kicks to the 30 with regularity, but we haven't allowed any touchdowns and it hasn't been horrible.  It has been better the past few weeks (allowed Purdue less than 15 yards per return last Saturday), and really I'm not all that concerned about it anymore.  Similarly, punt coverage has been kinda meh, but nothing disastrous.

Everywhere else: yeah, we're good.  Keshawn Martin has been absolutely unreal at returning kicks the past few weeks: he had 227 return yards last week, including a return to Purdue's 10 yard line late in the 4th quarter, and a spectacular return for a touchdown against Minnesota.  He's not quite as dangerous bringing back punts, but still quite good.  As you say, Swenson is the best kicker in the conference, and he's coming off a 4-4 day last Saturday (including two 52 yarders).

This seems to be an area where MSU has a major edge, and we'll really need to take advantage of it in order to win. 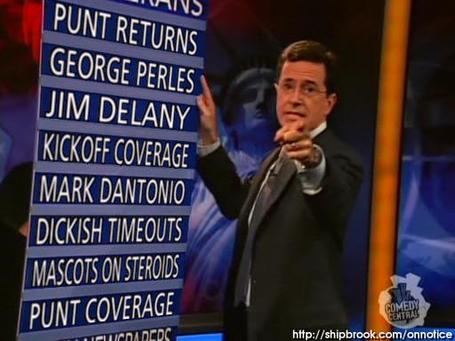 4.  Everyone knows about Greg Jones already, but who are some other players on MSU's defense we should be concerned with?

The linebackers as a unit are pretty good.  Eric Gordon has had a very good season at weakside LB, and Jon Misch had a decent game last week at the other outside spot.  Jones is certainly the leader, however.  The two defensive tackles (Jerel Worthy and Oren Wilson) have both been very good; Worthy should certainly end up on the B10 all-freshman team.  They've been let down by the defensive ends, however.  We hoped that Trevor Anderson would be picking up bunches of sacks this year, but he's been mostly anonymous.  We've had success pressuring opposing quarterbacks through linebacker blitzes, but that obviously creates problems for the secondary.  And the secondary is terrible.

So, yeah, worry more about our offense and special teams than the defense.


5.  Let's go back to the conclusion of last year's game, with the score 49-18, and Penn State passing out roses on their sideline:

The team was down 31 points, it was about 25 degrees outside, and the Michigan State players were essentially yucking it up and taunting the Penn State fans who wanted to celebrate a conference title.  So, what the hell?  What was the reaction to those timeouts in Spartyland last year, and did Mark Dantonio inadvertently do all of us a little favor by injecting a little dickishness into this fabricated rivalry?  Was there any justification ever given for that?

All right.  So, it should be noted that from the beginning, I wasn't pleased with the move; I cringed when it happened and told the whole entire internets that I thought Dantonio was wrong.  (Look for comments from "Ben."  But most everyone commenting shared my sentiment, I think.)  Dantonio never explained his actions, as far as I know, but I'm sure he would tell you that he was simply running his offense.  I think it's more likely that he was pissed that roses were already being handed out well before the final whistle wanted to stick it to PSU a bit.  Obviously, he was successful in getting under PSU fans' skin, if nothing else.  It wasn't a classy move at all, but oh well.

But, like, aren't you guys blowing this a bit out of proportion?  It's not like he killed your dog.  At worst, the timeouts made your team wait an extra 90 seconds to be crowned as the conference champion.  Dick move by Dantonio?  Yes.  Jihad-worthy?  I don't think so.  And anyway, I still don't have a whole lot of sympathy for the weather complaints.  We cheer for teams that play in bad weather; it happens.  I've seen my team get stomped on in worse weather than that; if I was watching MSU clinch a Rose Bowl berth, I'd be way too delirious with excitement and joy and happiness and so forth to even notice that it was 25 degrees outside.

Anyway, it's probably not a bad thing in the end.  Like you said, this game needed a bit of spice.  It at least sort of has it now. 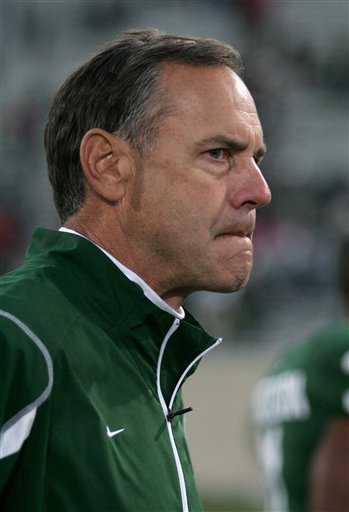 6.  What's your confidence level for this game, and how do you see it shaking out?

Not all that high, honestly.  Clark picked our defense apart last year, and while you don't have Derrick Williams anymore, our pass defense is even worse this time around.  Also, I have distressing visions of Jared Odrick pwning whoever's blocking him and not giving Cousins enough time to be comfortable.

More generally, Dantonio has done a lot of good things during his time at MSU, but beating teams with appreciably more talent certainly hasn't been one of those things.  So, I'll remain skeptical until we finally win one of these games.  It's at home, which is good, and I could definitely see the special teams stats ending up very lopsided in our favor.  But PSU is the better team, and you're playing for more: a win for us would upgrade our bowl game slightly, but a win for PSU might send you guys to the BCS.  So, an upset isn't out of the possibility, but I'm not particularly optimistic.