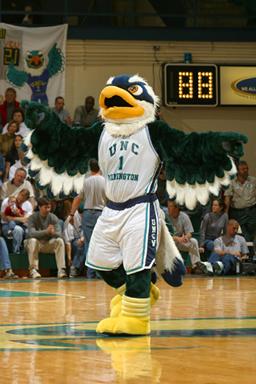 Oh, forget it. I don't even have the heart to write the fake "Tarheels Beat Nittany Lions" post.  This game was a disaster, practically from the opening tip.  UNC-Wilmington (1-2) -- a team that went 7-25 and had a RPI ranking of 273 one year ago -- never lost the lead after breaking a 7-7 tie early in the first half, although Penn State (2-1) whittled the deficit to two points with three minutes remaining.  Chris Babb, Andrew Jones, and Tim Frazier combined to shoot 4-28 from the field.  Babb was an unconscionably bad 2-10 on his three-point attempts.  Despite those awful shooting performances, Cammeron Woodyard couldn't get more than four minutes of playing time -- two more than Andrew Ott received.  Talor Battle scored 29 points, but was 8-23 from the field. However, he was uncharacteristically great from the foul line (11-12).

How bad was it?  Penn State had nine steals and only five turnovers, and still lost by 11.  It was obvious that Ed DeChellis was frantically searching for a winning combination, like an 80 year old man about to bet his Social Security check at the racetrack.  Nothing worked.  Perhaps Penn State was flat due to playing a game two nights ago and traveling to South Carolina.  Maybe it was just one of those games where four guys were ice cold at the same time -- the only two players to hit more than half of their field goals were David Jackson (4-5) and Jeff Brooks (4-6).  Except for the unusual amount of made free throws, Penn State looked like the DeChellis teams of 3-5 years ago.  Next to no production from the post players, awful perimeter defense, and lots of bricks on the offensive end.

It'll be filed under the "Bad Loss" category come March, if this team turns out to be bubble-worthy again.  The Charleston Classic, just like the other in-season tournaments Penn State has particpated in recently, is already an epic failure.  This was Penn State's chance to add some quality wins (or hell, some quality competition) to its resume, against teams like Miami, Davidson, or South Carolina.  Instead, it's Tulane tomorrow afternoon at 12:30 p.m.  No rest for the frigid.