A Student Section In The Country

Share All sharing options for: A Student Section In The Country 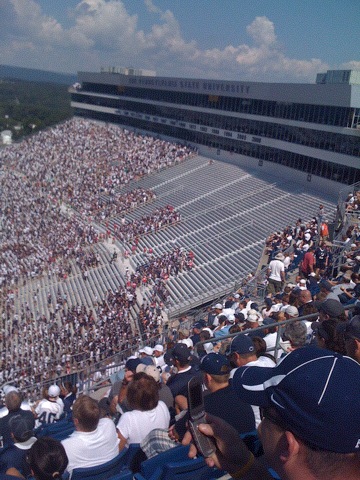 One of the running subplots throughout this season has been the paltry showing of the Penn State student section.  It's caused grief from any number of angles:

From The Bluehairs:  Older alumni/fans are constantly and angrily grousing about how students don't appreciate the limited opportunities they have to attend Penn State games as part of their college experience.  These complaints are often accompanied by claims like, "I was NEVER late to a game and ALWAYS stayed until the very last play!"  The students care more about tailgating than the team.  They can't wake up in time.  They're spoiled.  Basically, it's multiple forms of "get off my lawn", inevitably coupled with a proposal to reduce the size of the student section.

From Within: Lots of griping is coming from within the student population, mostly from the Paternoville diehards who helped build the student section's reputation over the past five years.  The basic argument:  if they can be in the front row when the Blue Band takes the field, why can't everyone else?

The truth is a greased pig, my friends.  You can corner it, but you'll never fully grasp it for more than a second or two.  Late last week, I decided to write something about the student section issues, and figured it would result in a long-winded rant about apathetic, spoiled fans.  It hasn't, and by the time I joined my old friend WFY for a little Penn State chat on Friday afternoon, I had practically exonerated the entire student body in my own mind.  That's come back to earth a bit, yet I rise in a half-hearted defense of the students.

Okay, let's try to nail down some basic facts.

The student section is roughly 21,000 to 22,000 kids.  This is basically half of the University Park enrollment and 25% of the enrollment of the entire PSU system, from Behrend to Mont Alto to Great Valley.  That's a large swath of students.

Surprise, the home schedule sucks!  No shock to anyone who...well, anyone.  So far, home games for 2009 included such luminaries as Akron, Syracuse, Temple, Eastern Illinois, and Minnesota.  There may have been another game, though I can't seem to recall it at the moment.  Anyway, most of these suckfests started at noon.  And I'm not sure how long you have been following Penn State football, but students are always late for noon games, and that's without...

This ass-backwards ticketing system.  The current system was created in response to an outcry among students who really wanted to attend games were shut out because other students were scooping up tickets just to scalp them at a significant markup.  The result?  Good intentions and horrible execution.

Students will be able to sell their tickets for $30 to $60 for up to six games or forward them to a friend on the Web site. They will be able to buy group block tickets and purchase tickets online for themselves and a guest.

Ticket purchasers must pay a 15 percent processing fee in addition to the ticket itself, and guest tickets will include a $29 validation charge. A valid credit card is the only possible means of transaction.

New deadlines for selling and purchasing tickets will be in effect as well: Students hoping to sell tickets must do so by 5 p.m. Thursday the week of a home game.

When terms such as "processing fee", "validation charge", and "resolution booth" are part of the process, is it ever a good thing?  A major part of the problem is the inability to transfer tickets after the deadline (in addition to the 5 p.m. deadline, there's a Thursday 4 p.m. deadline to buy a guest ticket).  Have you met college students?  Whether it's someone from the Class of 2011, 1998 (hi!), or 1978, college students aren't exactly the easiest people to nail down when it comes to weekend plans.  Plans change.  Friends unexpectedly come to visit, or PSU students take off for a party in another town.  In a paper ticket system, tickets could be bought or sold right up until gametime, and often for a price far below the $30 price floor set by Penn State's current system.  Instead, many of today's student seats are going unfilled due to an inability to transfer extra or unwanted tickets after the Thursday afternoon deadlines.

Yeah, the current students are a little spoiled by success.   It's true, and the student section is probably a little too big.  And this brings us back to my running gripe about the university trying to perpetuate the magical 2005 season.  Not that there's any turning back at this point, but I'll lay this out one last time*.  The raw emotion that built up throughout the 2005 season was the result of years of losing, a ridiculous last-minute victory at Northwestern, a defining leap forward against Minnesota (punctuated by this Michael Robinson run), and a week of "oh my God, I hope we're ready for this" leading up to the Ohio State game.  And after that draining victory, Kirk Herbstreit saddled Penn State with this:

Which, okay, yeah.  They were the best student section in the country on that night, because they suffered through unimaginable suck of The Dark Years and finally were able to release that emotion.  But Penn State took that Herbie quote and ran with it -- it was on t-shirts, all over the internet, and is now on signs above the student gates leading into Beaver Stadium.  But it must be true, because Kirk Herbstreit would totally never say such a thing about any other student section, especially not one short year after he said it about Penn State's students.

"The Best Student Section in College Football" (via txaggie2011)

But whatever, that's ESPN and modern sports journalism for you.  Everything is BEST EVAR until the next "best ever."  Regardless, it's an impossible standard to maintain.  When the lights fade after a huge game but the self-promotion machine remains unstoppable, Penn State fans are left holding their students to a standard that (1) the students didn't really ask for, (2) can't be replicated on a weekly basis, and (3) isn't really fair or deserved, anyway.  And the football marketing people are left attempting to extract every last drop of energy from the 2005 season, and most especially that unique set of circumstances that led to the best and loudest atmosphere in Beaver Stadium history.  Although, let's be honest, what was Guido D'Elia supposed to do with that Herbie quote, ignore it?  It's D'Elia's job to promote Penn State's football program to fans, media, and recruits.  We can argue all day about the best way to go about that mission, but that's the mission.  He was handed the ultimate soundbite by one of the premier college football pundits, right?

Look, students are students and fans are fans.  They enjoy tailgating, hate noon kickoffs and crappy opponents, and will inevitably arrive late for noon games against crappy opponents.  There has always been a small segment of fans who will show up early, be loud throughout the game, and stay until the final whistle -- and bless their big hearts for it.   The cold truth is that those people are a small segment of the fan population.  You were never late when you were a student?  Good for you!  You're a Paternoville camper and stand in the front row?  Good for you, too!  To the average fan, student or otherwise, these games can't possibly match the emotion of the 2005 season because the team has done quite well recently.  There's no hunger, no suffering from which to rise.

What is going on with your attendance at our athletic events?

Most glaringly, what's with the empty seats at football games?

There were as many snowmen observing the game in sections EAU and EBU as there were PSU students for a 3:30 p.m. game vs. Minnesota two weeks ago. I understand the weather issue, but where are the school spirit and the old college try and extra effort to support the team?

Before I go any further, I want it on the record that I think we have the best student body in the land. Hands down…most of the time.

There's your problem, sir.  "Hands down...most of the time".  Later, Battista asks, "Are we the 'Greatest Show in College Football' with the 'Best Student Section' only for 8 p.m. games in good weather?"

And the answer is no, of course not!  That 2005 Ohio State game was played in an awful, cold drizzle.  This year's Iowa game was even worse, but the whole stadium was into those games because of the circumstances, not because they felt compelled to live up to a fabricated reputation based on cheesy white t-shirts and stadium hype videos.

Students buy season tickets for roughly the same reason as the general population:  one or two big games (maybe three, if there's some sort of scheduling anomaly or a random Big Ten team springs to life for a season) which are watered down by the dregs of the college football world.  And I can guarantee (hands down, most of the time) that the students will be present in full force** when the Buckeyes and Lions kickoff at 3:30 p.m. Saturday.  Not because of some temporary, imaginary title bestowed upon them my Kirk Herbstreit, but because the circumstances demand it.

* - We all know this won't be the last time.  This issue is my baby and I'm not letting it go.

** - But you kids might want to think about leaving the tailgate 30 minutes earlier than usual as to not make yourselves look like total frauds, okay?