[Programming note:  Penn State's basketball team tries to extract themselves from the quicksand today at 12:30 p.m. against Tulane (0-2).  No front-page open thread for this one, so it'll be up to someone to put up a Fanpost. And here it is. - RUTS] 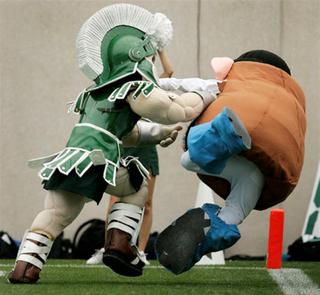 This must have been during a MSU-Notre Dame game. LOLtato.

BSD Mike: Oh, how I look forward to this game. It seems like every year Sparty comes into the season finale licking their wounds and hoping to squeak out an invitation to the Alamo Bowl. And every year it's such a pleasure to slap them back to reality. Last year was particularly fun because Sparty woke up that morning thinking they actually had a chance at the Rose Bowl. How cute. Then Daryll Clark torched them silly, and Dantonio went all pissy pants in the final seconds as we celebrated. Here's an idea, Mark. If you don't like our boys celebrating, try beating them. Of course, let's not forget Dantonio had no problems enjoying a Gatorade bath in 2007 while JoePa waited to shake his hand at midfield. What goes around comes around, dude.

This year I expect more of the same. Sparty hasn't beaten anyone with a pulse this year. Their passing defense is terrible. The rest of the team is nothing special. Though they'll be playing with that motivation of hoping to get a third tier bowl game, our boys will be playing for a possible invite to a BCS bowl. Just slightly higher stakes. Give the edge to the good guys, and Sparty can take a bus to the Motor City Bowl in Detroit.

Kevin HD:  I’m usually pretty good at blinding myself in games like these, but I’ve got to be honest: the more I look at this one the less enthused I am.

Yesterday’s Q&A’s had one theme for me: special teams.  It’s not that we aren’t making any big plays in the kick game – we aren’t -- it’s that we’re bad, bad, bad on a level I didn’t quite realize.  I mean, 100+ in most categories with the athletes we have?

The bottom line, though: Penn State is the more talented team, but Paterno/Hall need to commit to protecting the quarterback at all costs.  When things break down Clark isn’t going to persevere anyway, but if you give him a chance with calculated risk he performs every time.  Prediction: pain and Paternoball.

I think a blowout here and a struggle in the Iowa-Minnesota game gets us into the BCS, but I can’t predict that in good faith.  Sure, the Iowa game might be ugly, but I suspect ours will be as well.

Run Up The Score:  Be prepared for a shootout, as both teams should have great success(!) passing the ball.  Each team should excel in the passing game for different reasons, however -- Penn State, because MSU's secondary is garbage, and MSU because they protect the quarterback well and our defensive ends are having a below average year applying pressure.  And quite frankly, Michigan State has more quality receivers than we can cover, especially with A.J. Wallace likely out of the lineup.

It's the special teams blunders that continue to terrorize the Nittany Lions -- really, the only disasters we're missing are a blocked field goal, giving up a kickoff return for a touchdown, and the dreaded "krumble" (kickoff return fumble).  Michigan State has a clear edge in nearly every facet of the kicking game.  Further, Sparty should be the looser team, having locked up some random, low-level bowl game while Penn State has to deal with the pressure of grabbing an at-large BCS bid in a hostile environment.

The common denominator in Penn State's three (three!  It's the 12th game!) previous road games at Illinois, Michigan, and Northwestern.  Slow, slow starts.  Expect another one tomorrow.  Sparty struggled mightily with Purdue last week.  They had 16 less first downs, 20 less minutes of possession, and gave up 524 yards to the Boilermakers...but still won due to special teams play.  Sparty also lost to Central Michigan, Minnesota and Notre Dame.  They needed overtime to beat Michigan.  And yet they're only a three-point underdog at home.  (Wouldn't touch this game with stolen money, by the way.)

I tend to get tagged as the negative editor around here, but I don't think I've picked against PSU all year.  Bad feeling about this one, though.  Michigan State starts fast, Penn State makes a run in the middle quarters, and another epic fail on special teams dooms the Lions in the end.