Edit: The file can be downloaded here. Double edit: I forgot to re-randomize Okla St.'s RNvariable after testing something.  Just copy and paste one of the random number generators in cell P12.

The regular season is done.  Penn State stands at 10-2 and is the college football equivalent of a "bubble team."  Three questions remain:

1) What are the chances of us going to a BCS game?

2) Who are our likely opponents?  Who do we have no shot of playing?

Ladies and gents, I present The Chart of Answers: 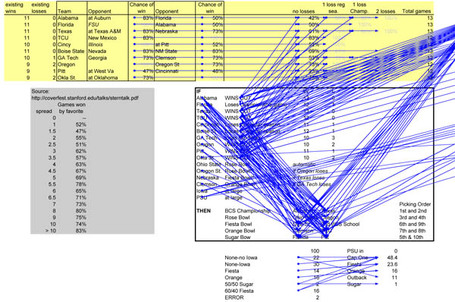 The chart in all of its excel precedent/dependent glory. It looks like a plate of hurl.

The Chart of Answers is my attempt to determine the most likely result of the NCAA season from this point on. The entire system is run on the informational theory process of simple entropy.  Think of it has flipping dozens of weighted coins dozens of times.  Although you can't definitely prove what will happen, you can infer some trends as a result.  the trick is in providing the correct "weight" to the coins (or NCAA football teams) to give you the results you believe to be most correct.  It's quick, it's dirty, and it's inherently biased, and I'm sure some people smarter than me can provide a better method of figuring this stuff out.  I have tried to be as unbiased (a loaded word) as possible and put my best guesses in determining who would be selected after the results of the conference championship games.  Keep in mind, this is all IN FUN--I don't intend this as a slight to your program.

The first step is to determine which teams should be studied.  Ohio $tate is a certain invitation to the Rose Bowl.  The following teams are fighting for the remaining BCS slots as of right now:

Of these, all but Iowa and Penn State have games to play between now and the start of bowl season.  Virginia Tech and Miami, FL have very slight chances of making the big bowls, but they are on the edge of the Top 14 in the BCS standings right now.  I factored them in to the mix in a different way.

The next thing to figure out is how to determine the odds of a team winning all of its games, losing a regular season game, losing a conference game, or losing all of its remaining games.  It is important not only if they lose, but when they lose as this has major implications on selection.  I think Bleed Blue 'n White has previously referenced this study concerning sports statistics.  Fittingly, it is titled, "Use and Abuse of Information in Sports." Don't mind if I do!  Their study determined that sports book spreads are one of the best methods of determining the winner of the game overall.  I'm not interested in beating the spread, I'm interested in knowing how often a favorite wins the game.  Overall, the team listed as the favorite in the spread would be won by the favorite 75% of the time.  Also, the greater the spread, the greater the chance the favorite would win.  Here's their findings:

Although there are obvious biases with individual spreads designed to sucker in bettors, it seems like a fairly effective method of "weighting" the chance of a team winning a game.  There are spreads available for every game this coming week, so I placed the percent values for this weeks games.  I then had to use a bit of creativity to  estimated the spreads of the games in the coming weeks.

They therefore have a 41.5% chance of winning their final two games at Auburn and versus Florida.

You probably noticed the 100% values next to Cincinnati-Illinois and Florida-FSU.  The issue is that Florida, Cincinnati, Pittsburgh, and Alabama are the only teams remaining that play each other with major implications to BCS placement.  There are so many iterations that even removing two games makes things much much easier.  Also, the odds of the Bearcats being affected by a loss to Illinois coupled with a win over Pitt is very small: they're pretty much a lock to the Sugar Bowl unless chaos happened above them and they go to the National Championship game.  The odds of Cincinnati beating Pitt, losing to Illinois, Texas losing, and TCU losing are very small.  Again, this system isn't perfect.  Also, some teams have a 100% chance against Bye Week.  Since none of these teams are coached by Charlie Weis, I feel they have what it takes to win against Nobody State.

I formalized the assumptions here:

These again are not guarantees.  I also made an assumption about the wistful leanings of the good ol' boys in the technicolor suits:

Effect of assumptions (things that weren't factored in the calculations but are noted):

Then I factored the BCS pecking order:

5. Sugar Bowl Pick #1: Replacement pick for SEC champion (in all circumstances except one)

Conferences opponents can't face each other except in the National Championship, and only two teams from each BCS conference can be selected.  At large picks are determined by I then ran the exercise several hundred times and tweaked the system until I removed all of the errors--Pitt v. Pitt in the Sugar Bowl and the like.  There is still one error: about 2% of the time there are two Big Ten teams selected in the mush of 6th-9th selections.  Since Ohio $tate is locked into the Rose Bowl, that would lead to three Big Ten teams in the BCS.  I can't resolve it without a circular reference, and that makes my head hurt.  These results are thrown out. Otherwise things are pretty gravy.

So, now that everything is fine and dandy, I ran the exercise one hundred times and recorded the results.  Here are some highlights: 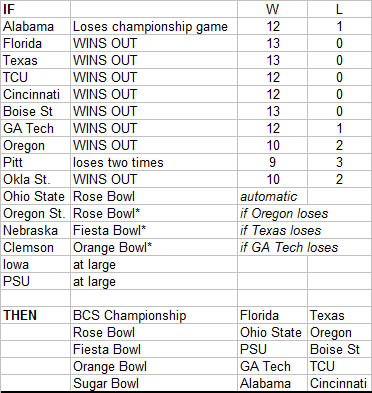 Here's one of the more common results.  Everyone wins except for the loser of the SEC Championship game and Pitt.  As a result, the Fiesta Bowl representative against Boise State is determined between PSU, Iowa, and Oklahoma State (30%/35%/35% chance respectively) and PSU has come out with an invite.  The SEC Champion and Fiesta Bowl rep shifts, but this matches the projections of many people predicting the BCS games. 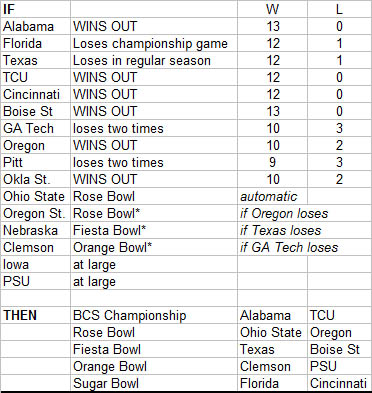 Here's a less common scenario where PSU makes it to the Orange Bowl.  Texas loses to A&M in the regular season and goes to the Fiesta Bowl, while TCU goes to Pasadena.  The Orange Bowl has the 8th overall pick, and would likely choose the Big Ten 10-2 squad over the available Boise State and Cincinnati. 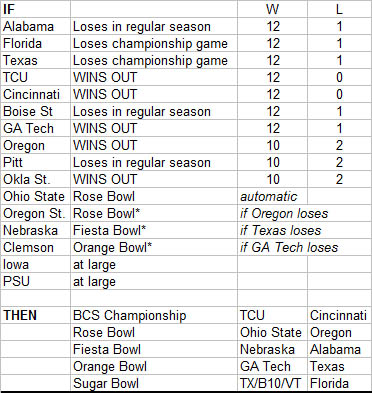 Here's a rare scenario that would bring the downfall of the BCS as we know it.  TCU and Cincinnati make it to the National Championship Game.  The Sugar Bowl would make the first pick after the Rose Bowl picks Ohio State and Oregon (or would they?) and would have their pick of either SEC school.  This would force Alabama to the Fiesta Bowl due to intra-conference conflicts with the SEC and Big XII.  There are a couple of iterations where I use a combination of outcomes such as the "Texas/Big Ten team/Va Tech" based on the slotting of teams around it.  In this case, it would almost certainly be the Big Ten.  This is one of the few scenarios where PSU could go to New Orleans. 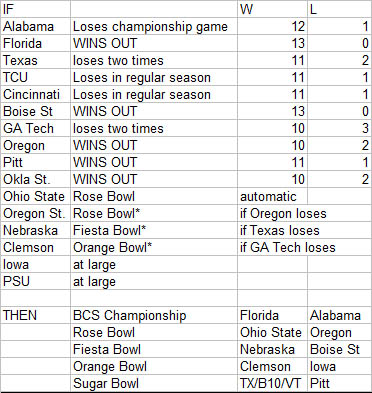 This is the death scenario.  Also known as the OMGSEC!!! scenario.  If this occurred, it would likely mean Florida and Alabama would have just enough points to play a rematch in Pasadena.  We see the "Texas/BigTen/VaTech" in the Sugar Bowl slot again.  Another possibility for PSU in the Sugar Bowl like last time?  No.  In this case, that spot would be the #5 pick, which would almost certainly go to Texas.  The Big Ten representative is in the Orange Bowl, this time the Iowa Hawkeyes.  In spite of all heck breaking lose, there would be no BCS bowl for the Nittany Lions.

So, I ran the calcs over 100 times.  Here are the tallied results:

and the likely opposition, assuming Ole Miss goes to the Cap One Bowl and Tennessee goes to the Outback:

How about some conclusions?

Therefore, this exercise as proven that it is statistically possible to hate every remaining team on the schedule ranked above us. QED

This has trended away from the typical hate week format, so I'll close with:

If the BCS system was a West German music act from the late ‘70s/early ‘80s:

It would be Klaus Nomi.  Why? because I think this exercise has shown that Lightning will have to Strike for this system to actually work as idealistically planned.  For all of the conjectures, this would be a LOT simpler if, ohh... the eight best teams in the BCS rankings managed to play in an eight-team playoff???  We would be left arguing who the 8th/9th best teams in the country are, which are usually a team that has a messup or two on their resume anyways so they have little room to gripe.  Also, like Klaus Nomi the BCS is totally ga... gamey.