Icers Continue to Roll Through the ESCHL

Share All sharing options for: Icers Continue to Roll Through the ESCHL

Injuries. Suspensions. This Icer team cares not. Okay, they do, and they'd like all these things to stop. But the Icers plow on regardless. As was mentioned in the last post, Marek Polidor and Chris Pronchik were both handed game disqualifications due to their involvement in the end of game scrum against Navy. This resulted in both players being suspended for Friday's game at Rhode Island. Thankfully, John Conte was back after missing the Navy weekend - a much-needed return on a thin defensive corps.

November 13th, @ URI, 4-1 W: With some depleted lines, the Icers looked to hold off an energetic Rhode Island team that was playing in front of their home crowd. And after some early back and forth, the Icers would get the all important first goal on the stick of Nick Seravalli. But this is the Icers we're talking about, and the Rams would get on the board with their own goal late in the period, making it a 1-1 tie after one period. The energy and intensity kept up in the second, and Chris Cerutti would put the Icers back on top just 1:27 into the period. URI would have their chances, but Teddy Hume would come up big time and time again, ensuring the 2-1 Icers lead after two periods. The third period belonged to the Icers, as Mike Broccolo would give the Icers a 2-goal cushion, and that's all Teddy Hume would need. A late empty-net goal by Ryan Paradis would cap the scoring, giving the Icers a huge 4-1 win on the road.

November 14th, @ URI, 4-3 W (SO, 2-0): The Rams weren't going to just roll over on their home ice. They came out with the energy, and an early first period goal would give URI the 1-0 lead. URI would continue to control play, as the Icers were just not making the right plays or the crisp passes. Still, halfway through the period, Marek Polidor would put home a rebound (original shot from Cerutti) to tie it at one apiece. But a few minutes later, some sloppy play in the Icers' defensive zone led to another URI goal, giving the Rams a 2-1 lead into the intermission. The Rams would keep up their side of the energy, as the Icers never seemed to get much going. The lead remained at 2-1, when Tim O'Brien would get taken down on a breakaway setting up the always exciting penalty shot in regulation. But much like the rest of the game, a sloppy attempt resulted in nothing. The Rams continued to dominate the play in the 2nd period, and with 30 seconds left in the period, URI extended the lead to 3-1.  After two periods of stumbling, the Icers finally decided to play in the 3rd period. In front of much of his extended family, Steve Thurston would cut the lead to 3-2 less than two minutes into the period. The Icers would continue to keep up the pressure, and with 9:16 left, Paul Daley would tie the game up after deflecting a Dan Loucks shot. Both teams would get their chances, but both goalies would come up big. Although the refs tried to insert themselves at times, neither team would capitalize before the end of the period. And to overtime we would go again. The OT was a frenzy of action, but neither team could find the back of the net. And so, to the shootout:

Since it's best of 3, the Icers only needed 2 goals and 2 stops to get the 4-3 win, and sweep a difficult weekend at Rhode Island. The Icers would get to head home with two more big wins in their pocket, and a home weekend set against Navy ahead. 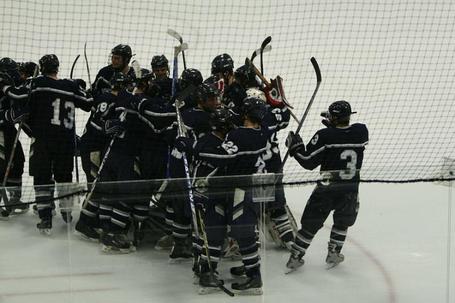 And there was much rejoicing!

November 20th, vs Navy, 9-0 W: With Navy in the house, the Icers were proud to make it Military Appreciation Weekend. And this might have been the reason the crowd was halfway decent. The Icers would have more energy in the first period, and Chris Cerutti would turn that energy into a goal 5:28 into the period. Nick Seravalli would keep things rolling with his 7th goal of the season four minutes later. The Icers would extend the lead to a comfortable 3-0 margin thanks to a Steinour goal. The dominance would continue into the 2nd period, as Seravalli would get his second of the game, this one just 1:35 into the second period. Not to be outdone, Steinour would get his 2nd of the night (to go along with his 2 assists) on a breakaway midway through the 2nd period. Ryan Paradis would make it 6-0 before Steinour would complete his hat trick just seconds before the end of the 2nd period. The 7-0 lead was enough to give Coach Balboni the chance to move starting goalie Teddy Hume to the bench to give the frosh Dan Ivanir some more playing time. A Dominic Morrone goal and Eric Steinour would solidify his spot as the top star of the night with his 4th goal, capping the Icers dominant win over Navy, 9-0.

November 21th, vs Navy, : A big win Friday night is not always the best thing for Saturday games. And with this being the last game before the team can head home for the holiday break, some lackadaisical play has to be feared. But a win here would give the Icers their 10th win in a row. Dominic Morrone would try to keep "low energy" out of it, giving the Icers a 1-0 lead just 1:16 into the game. And that would be enough to keep the Friday juices flowing. Chris Pronchik would get a couple goals, Eric Steinour would continue his weekend domination with his 5th goal of the weekend, Nick Seravalli picked up his 9th goal of the season, giving the Icers a 5-0 lead after 2 periods of play. As tempers began to flare, the goals and changes seemed to have been lost. Once again, Teddy Hume would be pulled after two solid periods of play, relieved by Dan Ivanir to give the frosh more experience. Offensively speaking, Marek Polidor, Seravalli, and Ceruttii would add some more goals for the heck of it, giving the Icers the 8-0 win. Weekend summary - outscored Navy 17-0, out-shot Navy 120-30. 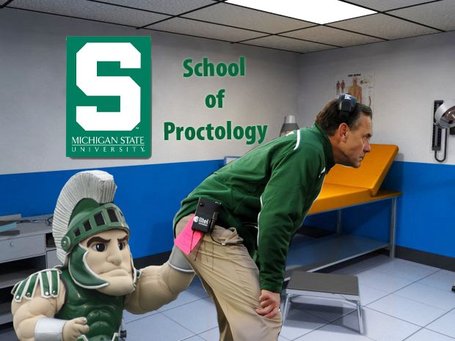 No real reason for reposting this. Guess it could be viewed as somewhat related...

Reflections and Ramblings: Again, no changes with the ACHA standings. Some rumblings that the Icers aren't getting the proper respect, seeing how Iowa State is ranked at #5 with a record of 12-4-2 at the time of the last rankings (just prior to Navy weekend). Hopefully there will be some more changes with the next rankings - Iowa State lost to surging Arizona State, Oakland upset Liberty. So there's some chances to move up in the rankings.

Coming up next on the schedule is the P.A.L. Stovepipe Tournament in Hooksett, NH. The Icers play Saturday at 4:30pm against NCAA DIII Southern New Hampshire. Depending on the result of that game, the Icers will play either UMass-Boston or Stonehill (both NCAA DIII teams as well) on Sunday. The winners of Saturday's game will play on Sunday in the "championship" game, while the losers will play in the "consolation" game. Really, results aside, playing against NCAA DIII teams is always a nice addition to the schedule. The Icers split their DIII games last year (lost the first game, won the consolation game), but overall it was a nice step in the right direction. "Youth" and inexperience may keep the team from performing at its best at the tournament. But with how the team has played over the past few weekends, this team is playing some solid hockey. And again, this might be one of the most offensively potent Icers teams I've seen in a long time. I'll likely do a separate post to recap this tournament by itself.

December has three games on the slate before heading into winter break. A home weekend of games against #11 Delaware, then a single home game on the 11th against Niagara. Delaware will be a battle; Niagara just battles to be annoying. I won't call them sure wins, but these are three winnable games for certain. And taking a 13-game ACHA winning streak into the break would be a great way to set up a grueling second half to the season.