What Would Caesar Do? Or, The Great Debate Part One

Share All sharing options for: What Would Caesar Do? Or, The Great Debate Part One

There's not much action to watch right now, but to get this long wait off on the right foot I sat down with your friend and mine, Hawkeye State from BHGP, to talk about, well, I'll give you three guesses.  The second half, linked at the bottom, is over at their place:

Hawkeye State: So I'm assuming we're going to be discussing the reasons Ceasar was so successful in his campaign against the Gallic tribes in the First Century B.C., right? I mean, there's nothing going on between our schools right now...

Kevin HD: That's a great place to start. You know the Gallic Wars never would have happened had Ceasar not been in so much gluttonous debt back in Rome. Oh, speaking of glutton and money, the BCS.

Let's do this backwards: Why does Penn State absolutely deserve a bid over Iowa? And remember: Godfather Paterno is watching you. 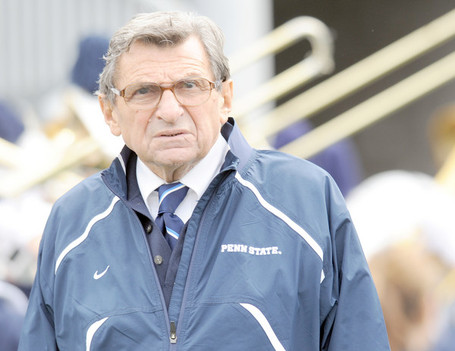 Don't stare directly into the eyes.

HS: Penn State absolutely deserves a bid over Iowa because I don't want to die. I'm half expecting the Iowa football offices to receive a package containing a fish wearing Ken O'Keefe's windbreaker.

There is little doubt that, when you're allowed to consider margin of victory, Penn State's performance against the soft underbelly of the Big Ten was considerably more impressive than Iowa's. Penn State smashed Michigan and Northwestern on the road; Iowa squeaked by Big Blue and lost to jNWU at home. That's to say nothing for the recent results against Indiana and Michigan State, both more impressive than Iowa's. Throw in the fact that PSU has won seven of their last eight (one more than my Hawkeyes), and that the allegedly hideous group of cupcakes the Nittany Lions played in out-of-conference turning out slightly better than expected, and Penn State's resume matches up favorably with Iowa's. It's so bad that Cedar Rapids AP voter (and friend of the BHGP) Mike Hlas put Penn State above Iowa in his poll this week.

Of course, all of this means nothing. If Penn State gets a BCS bid over Iowa, it's because they put 110,000 butts in the seats every week, have a larger national alumni network, and are a bigger draw on television. It looks like both of the two BCS bowls in play (Orange and Fiesta) are going to have at least one "small-market" team (one of TCU, Boise State, and Cincinnati). Under those circumstances, both bowl committees have to be terrified of their prestigious bowl looking like the ACC Championship Game to the 15 people watching at home. Iowa is a good draw for this reason; Penn State is even better.

Now shower us with praise, or Adrian Clayborn will block your face and return it for a touchdown.

KHD: Well, as they once famously said in Texas: 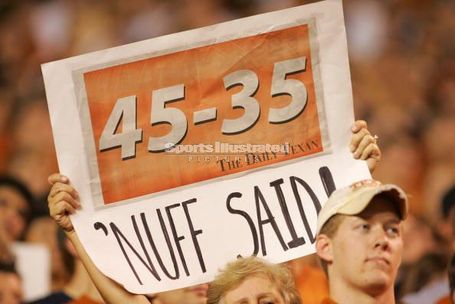 Sure there is more gray than that, but Penn State fans can't mock the patheticness that is Ohio State's claim to "five straight conference championships" and deny the importance of head-to-head.

Iowa is also getting hurt by the humans for timing, which is dumb. Rearrange the losses and Iowa is sitting ahead of Penn State in every single human and computer poll out there.

And really, while the Northwestern loss is a disappointment, the Wildcats are tied for fourth in the conference standings with Wisconsin, who they just beat. Penn State lacks a loss outside the top 15, but jNW isn't exactly jEastern Illinois.

Penn State will almost certainly make a bowl more money, but you could argue it's marginal in Arizona and outweighed by the 5% of football the bowls actually care about.

Is that right, 5%? Will football actually have anything to do with this decision, and should it?

HS: You're right on Northwestern being better than many considered, but -- and I'm not doing this as a dig to Northwestern fans -- the voters generally see them as just Northwestern. To them, regardless of what happens afterwards, a BCS team doesn't lose to Northwestern under any circumstance (in fact, Northwestern has never beaten a team to get a BCS berth). So while jNWU finished a respectable fourth in the conference, it doesn't really matter to the perceptions of those who make the decisions.

You're also right with your 5% estimate: A scintilla of what goes into bowl selection is actually football-based and, given the current scheme, that's probably the way it should be. If we were actually attempting to crown a national champion rather than make money for the Big Six conferences, we would have a selection committee and playoff. As it is, the conferences make money when the bowls make money, and the more the bowls make, the more there is for everyone. It's why bowl reps spend all their time in the parking lots and luxury boxes, rather than actually watching the game. And for the record, Iowa is probably the school that can least complain about the bowls ignoring the on-field results; twice in the last 4 years (Michigan in 2005, Northwestern last year), the Outback Bowl jumped Iowa ahead of teams who had equal records and beat them in head-to-head competition because Iowa fans travel better. This might be a case of payback as the proverbial bitch.

I don't know enough about Penn State's fan base to comment intelligently on who would bring more money to Tempe, but Iowa is a state full of landowners, and Arizona is now a state full of former Iowa landowners who like the dry heat. There's a lot of old money backing the Hawkeyes in the desert. It might be our only trump card if it becomes an Iowa vs. Penn State Fiesta Bowl Throwdown.

I'm not nearly as worked up about this as most, I think. As a lifelong Iowa fan, I've always had that traditional mentality of Rose Bowl or Bust (I don't know if that mentality exists at PSU, what with their relatively recent induction into the BXI). If we're not playing for a national championship or on January 1 in Pasadena, I'm not that interested in which January game gets us. It's not like the Fiesta Bowl is steeped in tradition and majesty, after all, and I'd just as soon smack down the SEC again on a day where I don't have to be at work and in a game not televised on Fox. I guess the question is, when the BCS lucre is distributed evenly throughout the conference, does it really matter which game we play?

You want more over at BHGP...read the second half.