And Here Come The Pretzels

Share All sharing options for: And Here Come The Pretzels 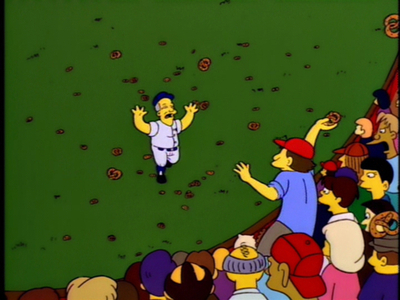 On yesterday's ESPN GameDay show, Chris Fowler and the crew passed along information that Penn State coaches indicated their offensive playbook would be uncharacteristically open against Ohio State.  The coaching staff trusted the improved offensive line, and especially trusted Daryll Clark to win the game for Penn State.  If such a strategy was ever in place for the Penn State offense, it was scrapped after their first offensive play of the game as defensive end Cameron Heyward bolted through Dennis Landolt and Evan Royster, defensive tackle Todd Denlinger spun around Johnnie Troutman, and defensive end Thaddeus Gibson hopped over a weak chop attempt by Ako Poti.  The result, 2nd and 16, and 59 minutes of puckering. 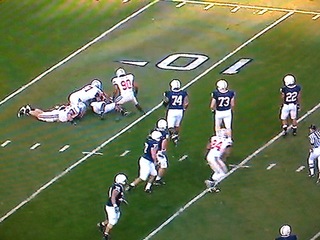 And shame on you for not fighting through your doubleteam, Doug Worthington!

Sifting through the rubble this morning, and nothing has changed.  Yesterday's game was an absolute owning of the home team -- coaches, players, fans, offense, defense, special teams -- from beginning to end.  Cameron Heyward is an unblockable monster.  No matter which Penn State offensive lineman he lined up against, they were quickly and embarrassingly thrown aside.  Daryll Clark was hit and hurried, and again unable to carry the team in those circumstances.

Clark will take some justified heat for this loss.  Fair or not, his place in Penn State quarterbacking history will be roughly alongside Wally Richardson's 1995-1996 run -- fondly remembered, but nowhere approaching legendary.  Daryll will leave Penn State with a shared Big Ten title, love and respect from a vast majority of the fanbase, and gaudy stats against awful teams.  People will be happy to see him when he returns to campus in 5, 10, 20 years.  But he won't be a Penn State legend or anything close to it.

I suspect the coaching staff feels embarrassed this morning.  There's absolutely zero excuse for the ongoing clusterfrick that is Penn State's special teams unit.  If Joe Paterno expects to win games with defense and special teams, it's probably a fine idea to actually have good special teams. Given the athletes on this team, are we supposed to believe that Drew Astorino is our best punt returner designated fair catcher?  Penn State's punt team practically handed Ohio State their first touchdown and took the life out of the crowd. And it's clearly not a matter of putting bad athletes on the field for kicking plays -- the players chasing Ray Small down the field on his first punt return are A.J. Wallace, Knowledge Timmons, Josh Hull, Chris Colasanti, Navorro Bowman, Brandon Beachum, and Andrew Quarless.  And they were put in a bad position by an awful Jeremy Boone punt.

The playcalling was atrocious.  If you don't have enough confidence to throw the ball on 3rd and 5, do us all a favor and kneel on the ball three straight plays and punt.  Your defense will get the same amount of rest, and there's no risk at all!  Beats the hell out of running the same tired crap right at Ohio State's strengths, or letting your quarterback get battered play after play.

Tom Bradley and the defense don't get a pass for this either -- they let the team down repeatedly on some crucial third downs.  D'anton Lynn blew a coverage that led to DeVier Posey's long touchdown.  On Pryor's rushing touchdown, Bowman had him dead in the backfield and was shaken off.  They had their chances to turn the game around, or even just get off the damned field, and failed.

Finally, man up and give credit to Terrelle Pryor and Ohio State.  This can't be stressed enough:  they dominated every single aspect of the game.  As for Penn State, they had their two toughest opponents at home and blew it.  While 10-2 is still within reach and sounds great, this season has already been cast upon the disappointment heap.  Penn State will end up in some middle-tier bowl with a cheesy sponsor.  Don't worry.  We'll pretend to care about it.