Yeah, it wasn't pretty.  But it's time to take stock and look forward.

Polls. Penn State will end the season with just two ranked teams on the schedule - Wisconsin is on a two year break - and for the second time Paterno & Co. played too safe for their own good.

The Iowa game could be rationalized as an anomaly, the weather and blocked punt weren't expected or advantageous, but getting dominated by an Ohio State defense means this coping mechanism from the Iowa game is now much more truth and much less fun: 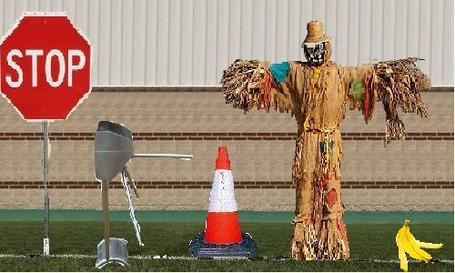 Now with a little more reality to go on, the polls were pretty punishing.  The Coaches' say 17th.  That puts Penn State behind fellow two-lossers OSU, USC, LSU, Miami and Oregon. It's a similar story from the Harris.

BCS.  Fugimaster runs down the BCS rankings and has your poll positions for the final BCS at-larges:

I think we can pretty confidently move TCU and Alabama into the "safe" column, and LSU would be eliminated by the 2 teams per conference rule (Thanks IcersGuy) so that leaves USC, Miami, Boise, and us for the final 2 at-larges. Is it a long shot? Probably, but stranger things have happened. I'm not giving up hope until December 5.

So there you have it, with the big assumption that Penn State wins out, of course.  I suspect the reaction to this for a lot of you is "OMG BCS? STFU!" but let's keep things in perspective.  Winning out is in the cards and anything can happen in a bowl game.

Lines. Vegas sent out the opens tonight as usual.  Penn State is favored by 22 next week against Indiana, a line 70% of the betters think is too high.  This lends credibility to the Pateroism that you're never as bad as they say you are after a loss.  Plus it's still Indiana, although they've played Wisconsin, Iowa, Northwestern and Michigan all extremely tough.

Some other lines of note:

And by the way, that OSU-Iowa game is one of only two contests between ranked opponents this week.  The other one is an underwhelming Utah vs. TCU.  The higher ranked school is favored by 18 points in that one.