Icers Skate On to Christmas

Share All sharing options for: Icers Skate On to Christmas

Coming off of a decent showing at the MPAL Stovepipe tournament over the Thanksgiving weekend, the Icers returned to the Ice Pavillion for a few ACHA games. On the slate for the Icers were 3 home games - 2 against ESCHL opponent Delaware, and then the last game of the 2009 calendar year against Niagara.The biggest question that always surrounds this situation is how does the team respond from a drop in the talent level - do they continue to play well? or do they play down to the competition? That's not to say Delaware is bad, but it's a concern for this Icers team. On the positive side, senior captain Matt Kirstein and sophomore forward Kurt Collins are both healthy and able to be inserted back into the lineup.

December 4, vs. Delaware, 2-1 W, SO (2-1): The first period would best be described as feisty. Half way through the period, Nick Seravalli would find his way to the box with a 5-minute major penalty for checking from behind. During this Blue Hen power play, John Conte would join Seravalli in the box in the form of a 10-minute misconduct penalty (not an extra power play, but Conte is in the penalty box for the next 10 minutes). Eventually, the 5-minute man advantage would pay off for Delaware, as they'd put the puck past Teddy Hume to take the 1-0 lead, and hold that to the intermission. The second period saw the Icers gain an early 4-minute power play opportunity, but the Icers looked completely inept.  Even after the fruitless power play, the Icers continued to get out-skated by the Blue Hens. As the 2nd period continued, the Icers began to calm down and gain more control over the game. But the Icers couldn't find the back of the net, and the game remained a 1-0 Delaware lead. The Icers would keep the energy up in the third period, and Chris Cerutti would finally capitalize, tying up the game at 1-1, 5 minutes into the 3rd period. The two teams would get a few more chances, and Paul Daley would get the best chance with just 9 seconds left in the 3rd period. But another save by the Blue Hen goalie, and another game headed to OT. Both teams had a few shots, and a late penalty on Marek Polidor gave the Blue Hens the best chance to win it in OT. But Teddy Hume and the penalty killers would step up big and send the game to a shootout. You know the drill:

So, hooray for Paul Daley and John Conte! These two will not be responsible for the hospital bills after another shoot-out heart attack. Not the prettiest game, but the good guys win and that's all that matters. 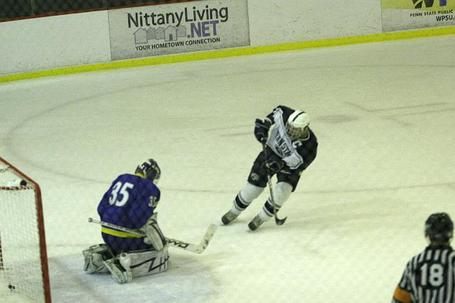 December 5, vs. Delaware, 6-0 W: The intensity between the two teams would carry into Saturday's game, and both teams would get their chances early. But captain Matt Kirstein would get his name back on the score sheet in just his 2nd game back from injury, giving the Icers the 1-0 lead. As the period went on, the chippy-ness increased and so did the penalties. But the penalties were just background noise to Marek Polidor, who would score on his own shot rebound, giving the Icers a 2-0 lead late in the first period. The second period started quiet and filled with stoppages of play. The Blue Hens would get a few chances, but Teddy Hume was up to the challenge. At the other end, Marek Polidor would get his second goal of the day, giving the Icers the 3-0 lead just 5 minutes into the 2nd period. The penalties would continue, but the Icers wouldn't let up, as Timmy O'Brien would get a shorthanded goal to extend the lead to 4-0, forcing a Delaware goalie change. Mike Broccolo and Chris Cerutti would add their names to the score sheet to cap the 2nd period scoring. The rest of the game was mired with scrums and near-fights, including the Blue Hen goalie trying to challenge Teddy Hume to a fight at one point. The UDel goalie was given a game misconduct, and Teddy was given a 2-minute unsportsmanlike penalty for pointing to the scoreboard in response. But when the tempers cooled, the Icers found themselves with a 6-0 win and another weekend sweep.

December 11, vs. Niagara, 10-3 W : Hoping to head into the holiday break on a high note, the Icers looked to take an early lead on the Purple Eagles of Niagara. And George Saad would gladly comply, putting home his 4th of the season less than 2 minutes into the game. But an Icers penalty would give Niagara the opportunity on the power play, and the Purple Eagles would take advantage, tying the game at 1-1. A lot of ticky-tack penalties gave both teams chances, but the goalies for both teams came up big, keeping the game tied going into the first intermission. (This was also the 12th of 21 games where the Icers were tied or losing after 1 period of play.)

But the Icers knew that they couldn't let this Niagara team stick around. Tim O'Brien would score early in the 2nd period, and George Saad would get his second of the night, giving the Icers a 3-1 lead less than 5 minutes into the period. For the second straight weekend, the tempers started to pick up. And for the second straight weekend, the opposing goaltender got tossed from the game for instigating a fight. After a long break to allow Niagara to dress a backup goalie, and after the new Niagara goalie made some sweet saves, the extended powerplay for the Icers started to pay off. Matt Kirstein and Kurt Collins both find the net on the power play, extending the lead to 5-1. But as the fisticuffs continued, the Purple Eagles started to slip in a few goals, and the lead was down to 5-3 as the 2nd intermission. The third period started out like the first two - a quick Icers goal. This time it was Eric Steinour scoring less than 1 minute into the period. Timmy OB would add another goal, as would Rich O'Brien (not related to Tim, and Rich's first as an Icer), Saad (his third for the hatty), and Chris Cerutti, giving the Icers a runaway 10-3 win. 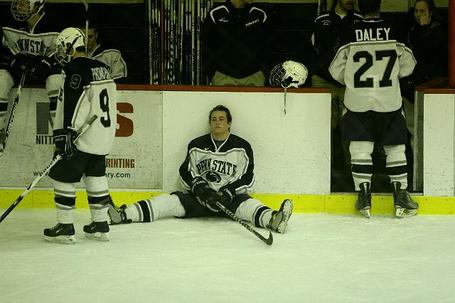 Nothing like a good mid-period intermission. Hooray for breaks!

Reflections and Ramblings: Icers made the expected jump to #5, leapfrogging Iowa State. The first weekend was a bad weekend for the top two teams, as #3 Ohio went on the road and swept #1 Lindenwood, and #17 Kent State pulled a huge upset over #2 Illinois. The top of the ACHA standings don't change much, so I wouldn't be surprised if neither team is penalized too harshly for their losses. At the same time, I'd be very surprised if Ohio doesn't make the leap to #1 at this point.

The inconsistency of this team will need to be resolved before tournament time. From week to week, day to day, and ever period to period, this team just seems to struggle to sustain 60 minutes of effort. And while 40 minutes of play will usually be enough for wins in the regular season, it's the reason the team has been bumped before the championship game these past few years.

Icers start the Spring semester with a game against Robert Morris (PA) at the Mellon Ice Arena. Game is on Friday, January 8th at 5pm. If you're in the Pittsburgh area and want to see the Icers, here's what I can find for the tickets. it looks like you have to buy full-day passes at $17 a piece. Not sure if they'll have a lower price at the arena day off the event for single game tickets. Anyway, after that the Icers return home for a game that Saturday against Washington & Jefferson, and then start into the meat of the schedule as Ohio comes to State College for a big weekend of games. Again, it's very possible that Ohio might be the #1 team in the ACHA at that point. The rest of the spring semester is filled with the ESCHL opponents, leading up to the ESCHL league tournament in February.

And finally, the ESCHL changes I mentioned in the last update are in fact official. Drexel and Navy are returning to the ECHA, and Robert Morris (PA) will be jumping to the ESCHL as the 5th team. A quick history of the ESCHL. The league was started in 2007, and included PSU, URI, UDel, Navy, Drexel, and Scranton. Scranton jumped ship after the first season, and the 2008-09 season was played with just 5 teams. This season, West Chester joined to bring the number of teams to 6 again. For those keeping tabs, that leaves PSU, URI, and UDel as the only 3 original teams, 3 teams have left, 2 have joined, and Penn State is still the inaugural ESCHL champion.