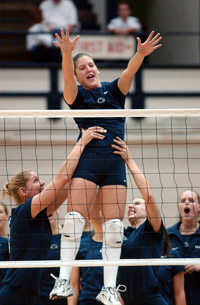 Maybe one day we'll have one of these for football. But tonight it's the Penn State women's volleyball team that plays for their unprecedented third straight national championship against the Texas Longhorns. The game will be televised on ESPN2 at 8 PM.

And if the national championship game isn't exciting enough for you, or if you're not the kind of guy that digs tall, hot girls in tight shorts, then flip over to ESPNU at 9 PM and check out the men's basketball team play Gardner-Webb.

We'll probably set up another thread of this one gets out of control.