Icers Take On a D-3 Tournament

Share All sharing options for: Icers Take On a D-3 Tournament

While we were all watching football over Thanksgiving weekend, the Icers found themselves up north, facing off in the 15th Annual Manchester Police Athletic League Stovepipe Hockey Tournament. But instead of the normal slate of ACHA teams, the Icers were up against two NCAA D-II teams (S. New Hampshire and Stonehill) and a D-III team (UMass-Boston). It should be noted that ice hockey has the bottom tiers a bit backwards. To make a long story short, the D-III teams play at a higher level than the D-II teams (D-I is still the best). There are also only 6 teams in the D-II, but I'm getting off topic here. The focus is the tournament, and the Icers would face off against the Southern New Hampshire Penmen on Saturday.

November 28, vs NCAA DII S. New Hampshire, 5-2 W: After losing the opening game of last season's NCAA tournament they played in, the Icers were looking for a way to be playing for the tournament championship game this year. The Icers and the Penmen found themselves in a feeling-out process in the first period, as both teams shared the energy, but neither team was able to light the lamp. In fact, the two teams were goalless for the first 34 minutes of the game until the proverbial light went on. Marek Polidor would find the back of the net first, scoring with 6 minutes left in the second period. But as is commonplace for the Icers this season, the Penmen returned fire with a goal of their own just 45 seconds later. Another Penmen goal just 2 minutes after that gave SNHU the 2-1 lead, but then they committed one of the worst hockey fouls - allowing the opponent to score in the final minute of a period. Ryan Paradis would tie the game up with just 52 seconds left in the 2nd period, and the Icers wouldn't look back. The third period belonged to the Icers, with two powerplay goals from Polidor and Paradis sandwiching a Joe Zitarelli goal. The Icers kept up the pressure, and Teddy Hume came up big in net when called upon. When the final whistle blew, the Icers skated off with a 5-2 victory, a 42-18 shot advantage, and entry into the championship game against UMass-Boston. 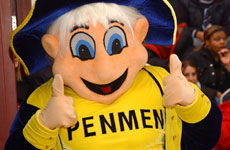 I STILL don't know what you are.

November 29, vs NCAA DIII UMass-Boston, 7-4 L: Like the Icers, the UMass-Boston Beacons had blown past their DII opponent Saturday night, and were looking to continue to roll on Sunday. And they looked like they would, as the Beacons would score just 2 minutes into the game. The Icers weren't about to be rolled over, as a Chris Cerutti powerplay goal and a Tim O'Brien even strength goal gave the Icers the 2-1 advantage. A late goal from the Beacons would send the game tied at 2 going into the intermission. But the second period was not kind to the Icers. A UMB goal just 17 seconds into the period was the first of 4 in the period for the Beacons. The Icers' mistakes were giving the UMB players more than enough chances, and once down 6-2, coach Balboni made the switch in net - pulling Teddy Hume for John Jay. Jay would play well enough, and goals from Tim O'Brien and Marek Polidor would bring the game to 6-4 early in the third. But the 4 goal lead and a 3rd period goal for the Beacons was enough to give the Icers second place for this tournament, losing to UMB, 7-4.

Reflections and Ramblings: I've updated the overall season record to 15-2-1, but note that the ACHA doesn't recognize non-ACHA games as part of the overall record. And either way, the tournament is based on league winners and the coaches' poll rankings. At 6th, we're doing just fine. New rankings come out on Friday, so it will be interesting to see if our ACHA winning streak, combined with loss to some of the teams ahead of us, give us another bump upwards.

Looking back at the tournament, the Icers did a solid job. Yes, you'd like to win it all, but it was a good 60 minutes against a DII team, and a solid 40 minutes against a DIII team. Again, this is still a fairly young team in terms of collegiate level hockey, and when you add in the injuries that this team has cycled through, it was a mighty fine performance for the weekend. The Icers definitely had their chances, and the UMB goalie came up huge at times, so the offense and the energy is there. The Icers also made their fair share of mistakes, including one turnover that lead to a UMB short-handed goal. Again, there are things to build on and things to build off of here, and the future continues to look bright for Penn State ice hockey.

The two final weekends of the semester see ESCHL rival Delaware come to town this coming weekend, and then the nearly-annual Friday night game against Niagara to close the fall schedule. Delaware finds itself in a bit of an off season, last listed at 11-5-0, and ranked #11 in the ACHA. It's always a tough series, but the Icers will surely be looking to keep their energy from this past tournament continuing into the ACHA games. Niagara is, well, Niagara. They'll be bothersome, but their absence from the coaches voting should say enough as to how well they've been playing this season. With the offensive firepower this team has shown, both weekends are easily winnable.

Another interesting link I've been pointed to is this article on John Walton Hockey about the Icers and the possibility of a NCAA level program. John Walton has been bouncing around the world of college and AHL hockey for a number of years, and currently finds himself as the announcer for the Hershey Bears. He's all for DI hockey at Penn State and is confused as to why we don't already have it. The author of the article, Jess Mikula (a Penn State student/alum - not sure if she graduated yet or not, but she has Penn State ties) gives some info and interview snippets from JoeBa and Balboni. It discusses some of the costs and the hows/whys - a very good read if your interested on what still needs to be tackled to get this program to NCAA DI levels.

Finally, word on the street is that Drexel and Navy will be dropping out of the ESCHL next season, and Robert Morris (PA) will be joining. This once again brings us to 5 teams in the ESCHL, but it opens up 2 weekends to find other teams to play. (Until a 6th team is announced, of course.)