No Ohio State, You Don't Get To Take Credit For This

Share All sharing options for: No Ohio State, You Don't Get To Take Credit For This 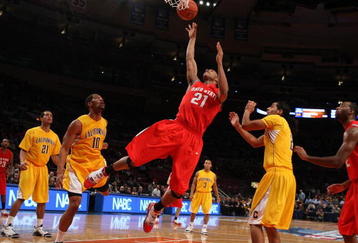 Ohio State had the last game on the last day of the Big Ten-ACC Challenge last night. And when they won their favorable matchup, predictability ensued:

After 10 years of heartburn, the Big Ten finally broke through in the ACC/BigTen Challenge thanks largely to Jon Diebler's sniper skills as the Buckeyes defeated Florida State 77-64 tonight in the Schott giving the conference a 6-5 series win.

I understand that, yes, the Buckeyes win meant the Big Ten won the fake challenge. But winning a game at home in which you were seven-point favorites does not make you the hero, even if you are Ohio State.

The credit here goes to Wisconsin. Unranked but at home, they jumped to an energetic early lead on #5 Duke and never looked back.

The Big Ten-ACC thing has always been difficult because Duke and North Carolina are usually major trump cards for the other side. Add in up-and-down schools like Maryland and Clemson, and it's hard to win the majority of the games starting in what is effectively an 0-4 hole. Wisconsin helped change that and it seems to have made the difference.

So we can all move on now, with the losing streak over, in a challenge that draws ratings but I don't agree really matters:

This is not some company shill. Sure, ESPN's family of networks has been a major player in the event over the past 10 years, helping coordinate matchups with the respective conferences.

But the concept dominates the sport early this week because it creates interest at every school in two high-profile conferences.

So yes, it was watched, but does that mean it matters? When Notre Dame and Michigan faced off in last year's LOL Bowl, everyone watched. But you'd be hard pressed to argue it mattered.

In fact, historically the Challenge might have been doing way more harm than good.

"So I think too much emphasis is placed on who wins the Challenge," Carmody said. "But I think it's a great opportunity to show off the strength of our leagues. It's a great barometer for your team, but at the same time it's only as significant as us beating Iowa State or Notre Dame."

So if anything, at least this thing allows us to make more backhanded comments at Notre Dame.

Update: And Rambler has your game-by-game review, complete with [redacted] photoshops and this map: 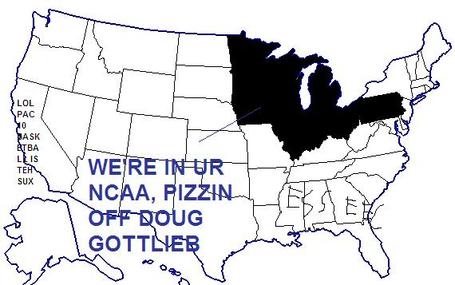