The BCS Is Patient, And So We Wait

Share All sharing options for: The BCS Is Patient, And So We Wait 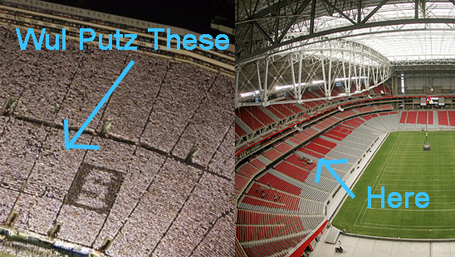 The SBN site BCS Revolution asks the question: Is there a reason to stay up all night running the numbers? And of course and answer is no. Not one single vote or computer position matter, mostly because we've had one of the least memorable national races in years.

The Alabama-Florida game was a good one, Cinci toyed with hearts in Pittsburgh in an entertainingly ugly win, Nebraska fell short in their attempt to screw the whole thing up in the most heartbreaking of ways, but in the end it comes down to this: Media and coaching voters simply aren't going to bump a national and historic power from the #2 spot, and we're getting the MNC everyone has expected for months now.

The only real drama today is the football vs. money debate between Penn State and Iowa. One school will play Monday, January 4th against what looks like Boise State, the other on New Year's Day at 1 p.m. against LSU.

The BCS selection show is tonight at 8 p.m. on Fox. May the most lucrative school win.

More form twitter. Every single bowl projection out there has Iowa as the BCS pick, although anyone adding commentary seem to immediately qualify the prediction as a toss up.  Mandel:

[3:00 p.m. update -- After a morning of badly sourced rumors indicating that the Fiesta might pair up two small-conference undefeateds, signs now point toward Iowa in the Fiesta and Penn State in the Capital One vs. LSU. -- RUTS]

Let's do this one more time for kicks.  In a sign that there is truly no accurate information out there, from the NYT:

No matter what ends up actually happening in two hours, the one thing we know for sure is that everyone was wrong about everything at one point today.