Come On, Get Hatty: A Quick Look At LSU

Share All sharing options for: Come On, Get Hatty: A Quick Look At LSU

It was a day of swirling rumors with visions of Arizona and Miami, but Sunday ended with Penn State dropping from the pack of BCS-eligible teams to where they belong -- the Capital One (Citrus) Bowl against LSU.  The 2009 season was a bit of a dud for the Nittany Lions, considering they lost at home to their only two strong opponents, but the CapOne matchup against a traditional SEC power gives Penn State a chance to end the season with an exclamation point.  So we're at the kids' table, so what?  At least Les Miles is here to keep things interesting. 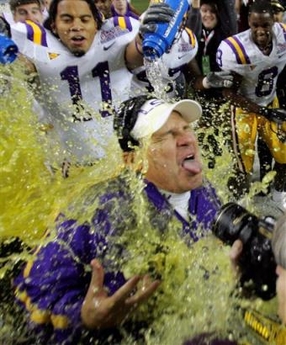 What do we really know about LSU?  Read on.

Their offense is teh suxors.  Ranked 84th nationally in rushing and 99th in passing, which combines to make them 108th in total offense.  Other, familiar teams in this neighborhood include Akron (#111), Minnesota (#113), Syracuse (#94), and Iowa (#93).  These offensive numbers put LSU at 11th in the SEC.  Not good.  Complicating the issue is Iowa's Angry Running Back Hating God taking time to punish the Bayou Bengals -- LSU's top three running backs are all out with season-ending injuries.

Their special teams are dangerous and weird.  #1 in punt returns (18.64 ypr), #110 in kickoff returns (18.66 ypr).  I don't think I've ever seen those stats be so different.  And it's really strange, because Trindon Holliday returns both punts and kickoffs and SWEET JESUS DO NOT KICK THE BALL TO TRINDON HOLLIDAY EVER EVER EVER.

Their coaches are...suspect.  LSU's got problems.  Most notable is an assistant coach allegedly paying a defensive linemen to transfer to LSU, but also, they recently lost their running backs coach (Larry Porter, who took the head coaching job at Memphis).  Oh, and Les Miles roams the sidelines, which is always good for Louisiana cardiologists.  You can count on Miles to do something brilliantly stupid at some point in a close game.  Results may vary.

Their quarterback is, perhaps, not as sucky as we'd like.  Jordan Jefferson's numbers aren't that terrible for a guy piloting the second worst offense in the SEC.  He's completed 62% of his passes with 16 TD's and 6 INT's.  He can scramble a bit, although Penn State's defense should have many chances for negative plays (the Tigers are 107th nationally in sacks allowed).  LSU's receivers are rather good, so they'll have a chance to move the ball through the air.  The key will be making them one-dimensional, then forcing Jefferson to make bad decisions with the ball.

If they were a Big Ten team, they'd be...  Iowa, but with Trindon Holliday and a much worse defensive line.  Lots of injuries at RB, meh quarterback, a few playmakers at wide receiver, and a stout pass defense.

Maybe we can be awesome?  Maybe.  Pretty even matchup, and I suspect Vegas will confirm that shortly.  Should be a very fun game.