Share All sharing options for: Nittany Lion of the Week - Gayle Hunter 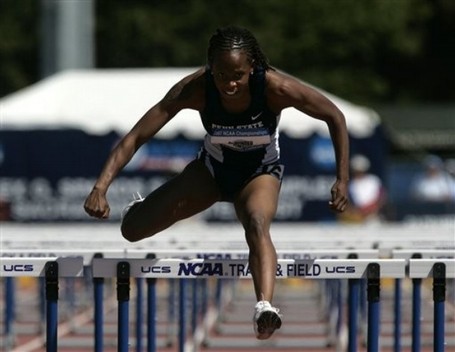 A two game losing streak has released the basketball team's grip on the weekly BSD honor. So this week we must turn our attention to other sports. Our BSD Nittany Lion of the Week is Gayle Hunter.

Hunter had a career afternoon on January 30 at the Penn State National earning an automatic bid to the NCAA Championships with a 4236 points in the pentathlon. The mark easily surpassed the NCAA qualifying mark by nearly 200 points and smashed her previously held school record. It also set records for the meet and facility. She also set provisional marks in the 60m hurdles (8.37 sec) and the long jump (20-5.25 ft) in the process. She also came back to win the women's open long jump with a leap of 20-1.75.

She followed up that performance on day one of the Sykes-Sabock Challenge Cup by winning the long jump by over half a foot and placing second in the women's 60m hurdles. She also anchored the 4x400 relay team which set an NCAA-best and current world-leading 3:36.10.

For her efforts Hunter was named Big Ten Athlete of the Week. She is currently the national leader for the pentathlon and nationally ranked in the 60m hurdles and the long jump.