A Good Week For The People On The Inside

Share All sharing options for: A Good Week For The People On The Inside 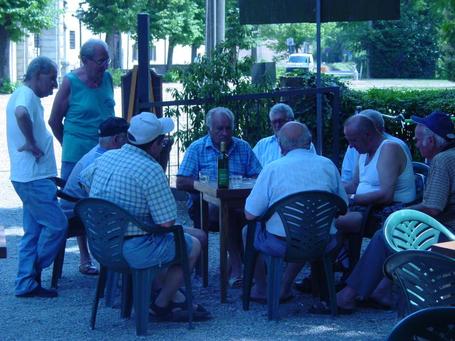 The BCS committee hard at work on change.

Four More Years! The Cotton Bowl, hoping to be part of an expanded BCS system and regain the glory of decades past, is looking at another long wait.

The last piece of the postseason puzzle for the four seasons beginning in 2010 is about to fall into place. The BCS will meet with the Fiesta, Orange and Sugar Bowls in Naples, Fla., on Monday, the final day of the bowls' exclusive 30-day negotiating period. And within a matter of days, the BCS will announce that those three bowls again will join the Rose in the next four-year rotation.

"Everything has gone well so far," said ACC associate commissioner Mike Finn, the current spokesperson for the BCS. "They will finalize things in the next couple of weeks."

So the level of support required to move to a +1 or other more dramatic change to the post season appears to have just gone up.

Job Security Pays.  The really ironic thing to me is that although everyone on the inside appears very happy with "everything", they actually aren't happy at all.  Why?  Because there isn't enough job security when nothing changes.  Having a rules committee that doesn't do anything means you don't need a rules committee, so don't expect the brainstorming sessions of The Dumb and The Powerful to change any time soon.

Announced as proposals on the table:

There is plenty of good analysis on this.  Nittanydelphia reviews all of the rules and EDSBS has a typically excellent take.  The only thing I would like to add is that anyone who watches Big Ten football already has right around zero faith in the conference officials, so the idea of giving them even more leeway to dramatically impact the game is downright scary.