Deon Butler posted an unofficial 4.26 this morning at the NFL Combine, second only to the 4.25 of Abilene Christian's Johnny Knox in this morning's wide receiver group.  Derrick Williams should be running shortly.  Coverage on NFL Network. 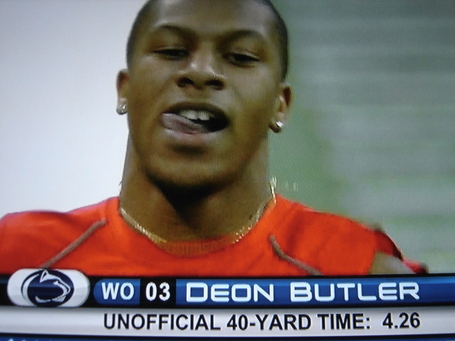 He is not normal.

Update:  His Nittany Lion teammates did not fare nearly as well.  Unofficially, Jordan Norwood ran 4.57.  Norwood never had the reputation as a burner at Penn State, so perhaps that was to be expected.  However, Derrick Williams was timed at a disappointing 4.58 on his first run, and followed that with a utterly disasterous 4.67.

Update #2:  The sauce, it is weak.  Officially, Butler runs a 4.38, good enough for 4th among the wide receivers.  Knox got bumped down to third, Ole Miss' Mike Wallace is second at 4.33, and Darrius Heyward-Bey wins the day at 4.3 flat.

Update #3:  According to NFL.com's Adam Schefter, Derrick Williams was sick all week and advised by his agent Chafie Fields not to attend the combine.  (That item, flagged by BSD commentor PizzaDelivery)