Ohio State Game Wrap-Up: The Roller Coaster Swings Back Down

Share All sharing options for: Ohio State Game Wrap-Up: The Roller Coaster Swings Back Down 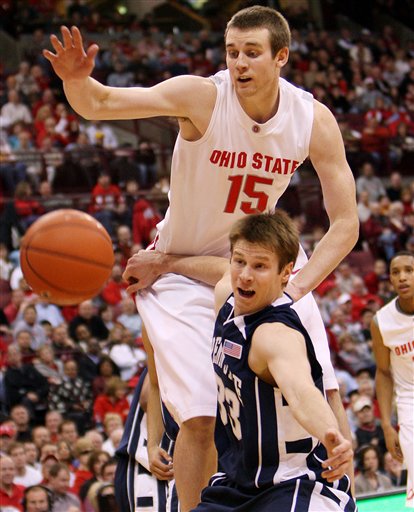 The Good. The obvious thing here is this:

It got to the point where OSU was actually building lead safety eight minutes into the game.

Of course that didn't last, and therein lies what is probably the biggest difference between this PSU team and the ones before it: I didn't stop watching the game even when they were down 19-2 because I knew it wasn't over.

There were some other highlights, Morrissey came off the bench with some very big threes, often at times when it looked like the game was once again slipping away. The team as a whole shot 39% from behind the arc.

In a story ESPN beat the hell out of, Cornley returned to his home town for one last shot at the Buckeyes. He seemed very focused all game and ended up leading the team with 11 points.

Cornley also somehow managed to avoid being T'd up by Ed Hightower, which might be the stat of the game. Despite the away crowd, the emotional implications of playing back home, and Evan Turner's classy expletives (brought to you in slow motion by ESPN!), well, consider me impressed, even if it a Cornley T has always led us to victory in the past.

The Bad. Big Ten Geeks is preaching the basics:

In fact, the whole team had a pretty easy time putting the ball in the basket, as the Buckeyes scored 1.38 points per possession. Yowzas! Even better news - our constant nagging about the turnovers might be getting through. The Buckeyes had only 6 in this one (and only 9 against Illinois), but then again, Penn State's defense is not exactly "frenetic." Ohio State's upcoming games against Purdue and Northwestern might provide a more rigorous test.

So, yeah, the defense. Lifted from BHGP, via BP:

OSU's eFG% on the season is a solid 55%, 11th best in the nation. PSU allowed them 62%, a significant increase. Penn State refused to respect the three point shot and as expected were simply outsized down low. This wouldn't have mattered so much except (BTG again):

The blueprint for shutting down the Nittany Lions, however, is well-known: make someone other than Stanley Pringle, Talor Battle, or Jamelle Cornley beat you. The trio combined for 31 points on 30 shots, and on most nights, the rest of the team doesn't have another 30 points between them.

P.J. Hill's designed lockdown on Battle early on didn't seem to necessarily disrupt Battle himself, it was just that the rest of the team appeared to wander around cluelessly when they were forced to do more ball handling in an offense that already is brain dead in the creativity lobe.

The problem is really not the shooting technique but rather the anemic offensive strategy, in which we play every possession like we are up ten points with two minutes to go. It requires one or two individuals to do incredible things in order to achieve offensive production, and now that the competition has figured out that Battle, Cornley and Pringle are typically the only ones capable of doing this, things can get ugly fast.

Now the alternative is to hold your opponent to 33 points, but that isn't a realistic long term strategy.

The rest of the ride. This wasn't expected to be a win, especially on the road, and so the loss doesn't represent any major setback. It would have more or less sealed an NCAA bid, but a re-focus on Indiana, Illinois and Iowa can send the team dancing anyway.

Also.  Crispin and Cream says to relax and NWO has another picture of an OSU player six vertical feet above a Nittany Lion.