Share All sharing options for: Nittany Lion of the Week - Talor Battle 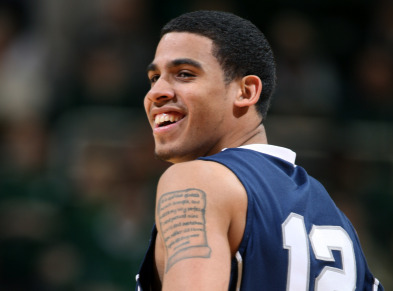 Talor Battle had an amazing performance on Sunday against Michigan State. The 5'11" point guard scored a career high 29 points in leading Penn State to the 72-68 upset of the #9 ranked Michigan State Spartans. Battle made 6-of-12 three point shots and at one point scored 13 straight points for the Nittany Lions in turning a 13 point deficit into a one-point halftime lead. Some of the shots he was making were coming a good five or six feet from behind the arc completely deflating the boisterous Spartan crowd and taking away Michigan State's home court advantage.

The win was crucial in that it dramatically boosts the perception of the Penn State basketball program. Penn State has suddenly become a hot topic in the discussion of bubble teams for the NCAA tournmant. It was also Penn State's first ever win in the Breslin Center. How does Talor Battle feel about that?

"I guess we made history, huh?" Battle said. "Coach mentioned that we hadn't won here. But I wasn't on those other Penn State teams. This is the '08-09 team. And we weren't going to lose by 37 like last year."

The kid just oozes with confidence and moxie. Enjoy him now, Penn State fans. It may be a long time until we see another player like him.

For his efforts Battle was named the collegehoops.net player of the week. He is the first Big Ten player to receive the award this year. Brent Yarina of the Big Ten Network calls him his Big Ten Player of the year for the first half of the season.