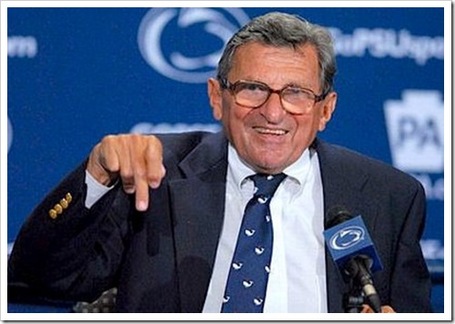 What Joe Paterno thinks you mean by instant message.

So despite being old and out of touch, Joe Paterno seems to have become the master of the latest trend in college football:

Scouts Inc. recruiting coordinator Bill Conley, in praising coach Joe Paterno, came up with a new moniker for "Linebacker U."

This is all commentary on Penn State's three talented signees who were all at one time "verbal commitments" to other schools (I'm talking about Kevin Newsome, Anthony Fera, and Darrell Givens).  Here is where things get twisted IMO:

If coaches now are being lauded for helping to convince committed players to renege on their word, college football really has gone mad. And it's more proof of the need for an early signing period.

For anyone who follows the creepy art of recruiting, "committed" is a term that is used rather loosely, and I resent the fact that a player who notifies a school months before signing day of his "decommitment" has (and this is a very poor choice of words) "reneged".

So all of this then leads to the faulty idea that moving up signing day would bring an end to the madness.  To me, this is a lot like saying if the IRS would move the tax deadline back a month no one would send their returns in late.

The problem is that college football coaches have become an incessant lot.  The reason we have so many "decommitments" probably isn't because the world is a more evil place, but rather because coaches are pushing for verbal "commitments" earlier and earlier in the process, to the point where there can be up to a year of open season remaining before he has to make any kind of binding pledge.

Said recruiting analyst Tom Lemming: "Guys will commit to what I call a 'safe house' school and then look upward. They're making a mockery of college football."

How is a kid wanting to attend the best school available a "mockery"?  If you want to blame the spiraling craziness of college football recruiting on anyone, I think it's best to start with the coaches sending hundreds of text messages a day, opportunists like Brian Butler, or even the recruiting services (who employ guys like Tom Lemming) doing good business by generating as much hype as possible around the college choice of 17 year old student athletes.

The recruiting analysts are doing what they do, though: making a big deal out of things.  I guess at this point I should be okay with that.

A better solution is to add an early signing date, but at a meeting last month, conference commissioners voted 17-4 against creating one.

The Big Ten, reflecting its coaches' desires, was one of the four.

Moving the signing day up is not going to change the process, it's going to move the process up.  That is what most of these people fail to realize.  Yes, coaches love the idea of getting to lock down their recruits at a younger age, but they also are giving up the extra time they have now to evaluate what kids are the best fit.  If anything, it will only lead to the non-BCS schools picking up even more of the under the radar players, further loosening the grasp the power programs currently hold on recruiting (with other blows being scholarship reductions and the current demand most recruits have of seeing the field right away).

I think the solution lies somewhere in the idea Brian at mgoblog "cribbed" from iBlog For Cookies: essentially an opportunity to register for a do not call list.  By actually changing the rules, you can curb the insanity.  The player takes back a bit more control of the situation and the coaches aren't forced to be 24 hour-a-day creeps in order to land a decent class.

And really that's all I want, less creepiness.