Share All sharing options for: Nittany Lion of the Week - Ed DeChellis 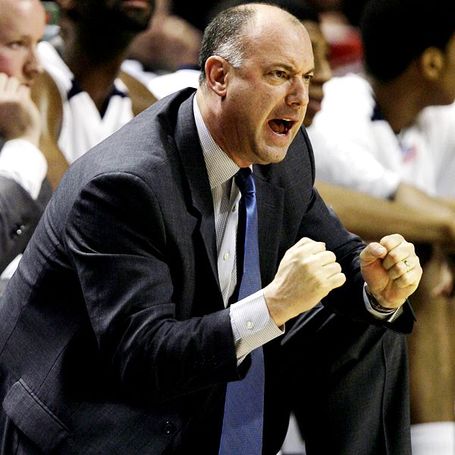 It's been a long road paved with a lot of pain and suffering. There have been insults on top of embarassments. There were times when it seemed like half of Nittany Nation (and not just the student section) had no faith in him. The other half didn't care one way or another. But Ed DeChellis believed. He came to Penn State not to just collect a paycheck and use the program as a stepping stone to a sweeter gig in the Big East. He came to Penn State to make his alma mater relevant again. It took six years full of stress and setbacks and sleepless nights, but Ed finally has his team on the cusp of their first trip to the NCAA tournament. In recognition for all he has done, Ed DeChellis has been named the Big Ten Coach of the Year by the media.

Though it still remains to be seen if Penn State makes the tournament, it's already been a successful year for Penn State. To finish just one shot away from the number two seed in the Big Ten tournament is far more than anyone could have imagined at the beginning of the year. If Talor Battle's three point attempt at the end of regulation of the Iowa game goes in, that's where we would be right now. What Ed has done with this program has been nothing short of a miracle. He has resurrected a dead program, and in the process he has energized a fan base that never knew it could care about any sport played indoors. For that, Ed DeChellis is our Nittany Lion of the Week.