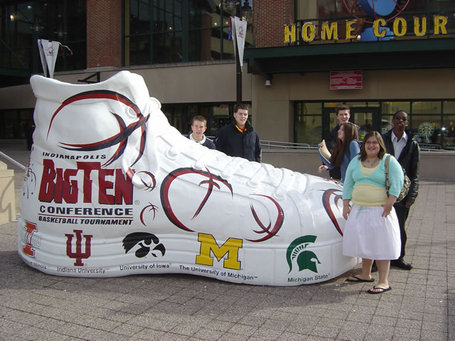 Look, Ma! I'm gonna get my picture taken with that big ol' shoe!

Here's a thread to discuss the early games for all you dead beats that either called in sick today to stay home or just watching the scoreboard when you should be working.

Game Previews after the jump.

Season Series: Tied at 1 win each.

Winner Plays: #1 Michigan State on Friday at noon on ESPN.

Game 1 Recap: Northwestern won 74-65 at home. It was the Wildcat's first win over a ranked opponent in three years. Craig Moore led Northwestern with 22 points. A slow start for the first half in which the Gophers missed 12 of their first 13 shots sealed the deal for them.

Game 2 Recap: Minnesota got revenge in a big way blowing out the Wildcats 72-45 on the home court. Lawrence Westbrook led the Gophers with 17 points thanks to four three-point shots. Not a single Northwestern player scored in double digits.

Who has the momentum: Northwestern is 5-5 over their last ten games with wins over Ohio State and Purdue and an overtime loss to Michigan State. Minnesota struggled to a 4-6 record down the stretch with all of their wins coming on the home court.

NCAA Tournament implications: Both teams need this win to stay alive. Minnesota is most likely in with a win. Northwestern needs this plus a win over the Spartans and a whole lot of help to have any chance.

Season Series: Tied at 1 win each.

Game 1 Recap: Michigan took game one 64-49 on their home floor. Manny Harris had 18 points and DeShawn Sims added 16. This win was the high water mark for the Michigan program this year giving them a 13-3 record. They lost five of their next six games and ended the season on a 6-9 streak.

Game 2 Recap: Iowa came back to take game 2 70-60 in overtime. The Hawkeyes turned it on in the extra period outscoring the Wolverines 14-4. Jake Kelly was a monster scoring 23 points and 9 assists. Freshman Matt Gatens added 16 points for the Hawkeyes.

Who has the momentum: The Wolverines are 5-5 over their last ten games, but have turned it on of late winning four of their last six games with two wins over Minnesota and a win over Purdue. Iowa went 3-7 to finish out the season with two of those wins coming in overtime, and one of those overtime wins was over Michigan.

NCAA Tournament implications: Michigan is hoping to win a game or two in this tournament to solidify their chances for the NCAA. Iowa has no chance of making the NCAA tournament outside of running the table this weekend, but if they can get a couple wins and get their record over 0.500 they might be able to sneak into the NIT.