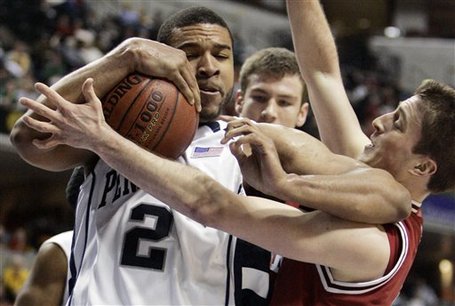 Well that went about as well as could be expected. Penn State jumped out to an early lead against the Indiana Hoosiers, and then they put their foot on the back of their neck and didn't let them get up. Penn State held a comfortable 25 point lead late in the game allowing Battle and Cornley to watch the last eight minutes from the bench.

Penn State didn't have to expend a ton of effort in this game. Pringle logged the most minutes with 31. Cornley played 30 and Battle had 29. This will help us tremendously against Purdue.

Cornley was a beast scoring 22 points. He had it going inside and outside. Pringle added 16 points and Jackson even chipped in 10 points to go with five rebounds. It was probably DJ's best game of the year and it couldn't come at a better time. The way Penn State was scoring with different weapons should give Purdue a lot to think about. Even Jeff Brooks scored six points.

Talor Battle left the court for several minutes in the first half to get a twisted ankle taped up. Hopefully he's ok, but it's good to see the offense didn't fall apart with him not on the court.

Penn State looked terrible after Battle and Cornley left the game for good going about seven minutes without a score. I know the game was over at that point, but geeze. It's Indiana. Our bench should have been able to score some points there.

The general consensus is yes, we're in at this point. We got some help with Louisville beating Providence, Texas beating Kansas State, Duquesne beating Rhode Island, and Arizona State beating Arizona. But Penn State can't let up now. A win over Purdue should make us a lock, and the only way we can be sure of making the tournament would be to sweep our way through the weekend.