Monday Pepper Is Swept, No Hitted, Making Up Words

Share All sharing options for: Monday Pepper Is Swept, No Hitted, Making Up Words 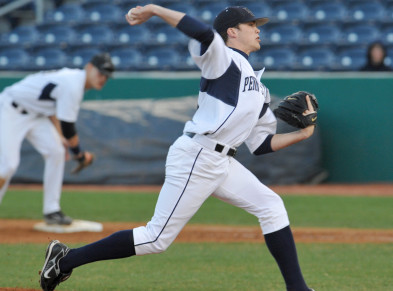 Going against the Penn State Athletic Department grain, the baseball team scheduled their first regular series of the season against a perennial powerhouse in the UT Longhorns. Rather than give the team a couple of weeks to get used to the warm weather, Coach Wine messed with Texas (R).

To no one's surprise, it didn't go very well.

The storyline here was how well #1 starter Lorentson would recover from giving up 10 runs (7 earned) on 11 hits in 4.2 innings against St. John's in the season opener.

It probably could have gone better. He only made it through 3.2 on Friday, giving up 7 runs (3 earned) on six hits, SO/BB of 3/3. Cianciolo, Palen, Pierce and Alfreno all did a nice job of finishing the game for him, but the damage was done and Penn State wouldn't be able to recover from the 7 run fourth.

The thing that has to really be grinding Lorentson's gears is the errors his teammates are saddling him with. Deese had two errors in the season opener; Nakata has two errors on Friday. While it makes it hard to get through innings, it's also an emotional let down to know you could have been out of the inning with everything in tact.

Penn State was getting on base, they had 9 hits and two walks, but the middle of the order often times left them stranded. The team finished with 10 LOB.

Similar to the Friday night game, Penn State was playing well until things unraveled in the 4th; Texas scored four on just two hits. It was a classic shoot yourself in the foot frame, with the opening batter getting beamed, two more walks and a couple of wild pitches allowing everyone to move us.

T.J. Macy gets the loss here but showcases exactly why keeping track of a pitcher's W/L is so stupid. He went eight full innings and gave ups just one run on five hits, SO/BB 7/3. He leads the team with a 1.59 ERA and has an avg against of .137.

He just couldn't get any support. Penn State had five hits on the day but couldn't get anyone in. It was still a good showing, though, and seeing Macy play so well for the second straight start in encouraging.

And just when it looked like the team was coming around, Texas' fourth starter, Brandon Workman, throws a nine inning no-hitter.

At least we didn't have any errors.

There isn't too much to say, really. Workman struck out 10, including leaving Deegan just one SO short of a golden sombrero. He walked just two.

The 10th Inning...So the four game sweep leaves Penn State sitting at 2-5, and while that looks awful it's as good as anyone could have hoped for before the season. It would have been nice to steal one in Austin, but the Longhorns are now 9-0 and look like a legitimate CWS contender. As much as PSU baseball has improved in the last three years, Texas is in another stratosphere.

Penn State has some time to rest and relax in the snow before taking on fellow northerners Akron and St. Joseph's this weekend in Palm Beach.