Nitt Picks Emerges From The Cocoon With A Football

Share All sharing options for: Nitt Picks Emerges From The Cocoon With A Football

Let's get the preliminaries out of the way -- Penn State takes on Florida tonight in Gainesville with a trip to the NIT's Final Four on the line.  Crispin And Cream has a extensive preview.  One advantage for the Nittany Lions is the preseason addition of former UF assistant coach Billy Lewis Preston to the PSU staff, because we're sure to get all sort of sweet inside information:

"He told us where the good wing place was," Penn State coach Ed DeChellis said.

Okay, then!  Talor Battle will play.  So will Jamelle Cornley.

Believe it or not, the Blue/White Game is only 33 days away.  Some news to ease our collective transition to Football Mode: 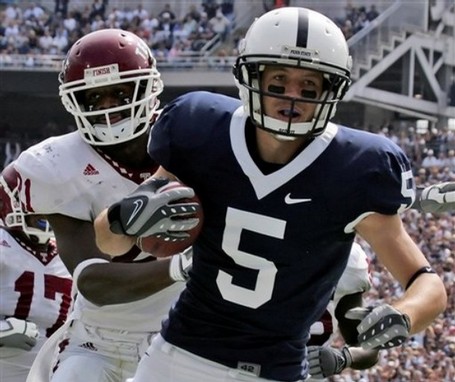 With respect to recently departed footballers, Penn State's Pro Day went rather well for our guys.  Derrick Williams significantly improved on his 40 yard dash times, as did Aaron Maybin.  Oh, Maurice Evans, too.  The Steelers are looking at A.Q. Shipley.  Jordan Norwood's getting a little attention as well, although he knows he won't be a first day selection, if he's selected at all:

Norwood weighed in at 184 pounds Wednesday, nearly 20 more than his playing weight this past season. He will join Butler and Williams in a workout with the Eagles later this week but isn’t worrying much about his draft prospects.

“I’ve been told that I’m a guy that’s a late-round draft pick, and told by a couple teams that if I don’t get drafted, I’m on their team,” Norwood said. “And that’s exciting in itself because all I want to do is play football. I’m not really worried about draft position or anything because hopefully 10 years down the road I’m still playing football and that all doesn’t matter.”