Nittany Lion(s) of the Week - Anastasia Ferdman and Doris Willette

Share All sharing options for: Nittany Lion(s) of the Week - Anastasia Ferdman and Doris Willette

When a Nittany Lion wins a National Championship in anything they immediately go to the head of the class and collect the BSD Nittany Lion of the Week Award. But when two of them win, well, they have to share it.

Ferdman dominated day one of the NCAA Championships only losing two bouts in the epee. Day two started poorly with her losing four bouts in a row. She turned things around and didn't lose another bout the rest of the day. Against Notre Dame's Courtney Hurley in the semifinal she trailed 7-12 and things looked bad. But she rallied to win 15-13, and then went on to defeat Harvard's Naom Mills 15-9 in the finals to claim the championship.

Willette scored a thrilling 8-7 victory over Harvard's Emily Cross in her semifinal bout. With time ticking down Willette lunged to score the winning touch with five seconds left on the clock of the final round. Then she went on to win the final against Notre Dame's Hayley Reese 15-5 to claim her second individual National Championship.

Really, we should congratulate all the members of the fencing team for another tremendous National Championship season. If for no other reason, it gives me the chance to put up this picture. (Ferdman in center) 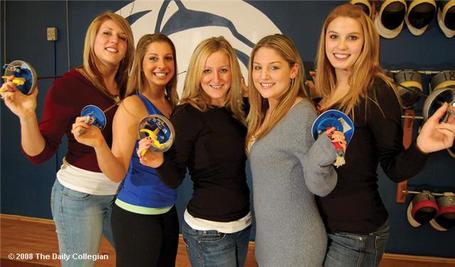