Threadageddon: Penn State vs. Notre Dame At The Garden

Share All sharing options for: Threadageddon: Penn State vs. Notre Dame At The Garden

A little background to ease you into tonight's action, courtesy of the New York Times' Quad blog:

Battle’s younger brother Taran Buie, a junior at Bishop Maginn High School in Albany, is considered one of the top basketball prospects in his class. He has five programs at the top of his list: Penn State, Georgia Tech, Maryland, Notre Dame and Marquette. (Penn State and Notre Dame play on Tuesday night at Madison Square Garden.)

“Hopefully he comes in and some of his A.A.U. teammates come in,” Battle said. “And then I’ve started something.”

Buie could be one of the most highly regarded recruits to ever seriously consider Penn State in basketball, at least in recent memory.

Still, this isn't about Talor Battle -- he'll be around for two more years.

It's really all about this guy: 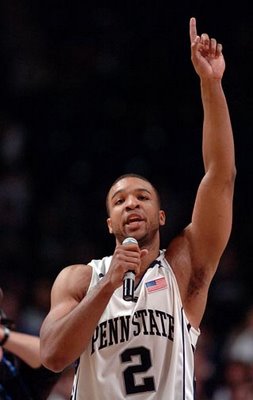 There can only be one.