The Kids Are Alright: Part Five

Share All sharing options for: The Kids Are Alright: Part Five

Finally, we conclude our series looking at the Penn State football recruiting class.

Hodges originally committed to Rutgers, but switched to Penn State in December. Some recruiting services see him as an outside linebacker at the collegiate level, although Scouts Inc. thinks he can excel as a safety:

Great anticipation and instincts when breaking on the pass; takes a direct angle to the ball. Looks like a gazelle leaping to intercept the pass; has perfect timing and displays soft hands when making the pick. Demonstrates the ability to play both three deep and halves coverage with equal effectiveness.

The Scouts Inc. link above has a nice highlight video. There's also a rather odd, long highlight film on YouTube. Hodges enrolled in January, and could be a candidate to see playing time in the secondary next year.

(We'll look at Kevin Newsome, Jordan Hill, Shawney Kersey, John Urschel, Michael Wallace, and Justin Brown after the jump -- click on through to the other side.)

Newsome was The Big Enchilada of the class, if only because Penn State was already low on scholarship quarterbacks before Pat Devlin left the program prior to the Rose Bowl.  After Devlin's departure, Penn State's scholarship quarterbacks consisted of Daryll Clark and Paul Cianciolo, who was about to run out of eligibility.  So, yeah.  Daryll Clark.  Kevin Newsome changed all of that.  He originally was committed to Michigan, but Newsome watched Rich Rodriguez continue to recruit other quarterbacks -- specifically, Tate Forcier, who Rodriguez annointed as the 2009 starter, leading to Stephen Threet's transfer.

Scout.com had him as the #10 QB; Rivals pegged him at #4. Scouts Inc. takes an interesting tack, mentioning Newsome as a potential linebacker or strong safety. Given PSU's quarterback depth chart, don't count on it. He's a perfect candidate to run the Spread HD. Penn State fans, here's what you've won:

Hill was another Rutgers commit that ditched the DORKS (Dear Old Rutgers Knights in Scarlet) in early January. He's from Steel-High near Harrisburg, which dominates small-school football in the region. Hill always wanted a Penn State offer, and finally got one following a senior season in which he had 117 tackles, 41 tackles for loss, and 12.5 sacks.  Meaty.

Another decommit from Rutgers.  It's a miracle they didn't finish with three recruits.  Kersey is a three-star WR on both Scout and Rivals -- Scouts Inc. is positive, but lukewarm. He's a guy who apparently needs some polishing as a receiver, so don't be shocked if he redshirts. Still, he runs a 10.4 second 100 yard dash, and the general consensus is that if he can get off the line effectively, he'll be a solid intermediate and deep threat for Penn State.

Urschel remains a bit of a mystery, especially because his commitment came at the same time as Kersey 2010 QB Paul Jones.  He really wasn't even on Penn State's radar until Thanksgiving, but if this Buffalo News post is any indication, Urschel's definitely a guy that you should be rooting for:

With a 94 academic average and sterling test scores, Urschel was intent on going to the Ivy League or a school like Stanford.  "After my senior season, coach [Brandon Harris of Canisius] make a highlight tape," said Urschel. "I wasn't really looking at too many big D-I programs, I was think Ivy, and he sent my film out. Apparently the big-time programs liked what they saw.

"I'm not even kidding … I never had would have thought to send [his tape] the places he did. I guess he's a better judge of talent than I was."

"I definitely have something to prove," he said. "I'm a late pick up. I guess you could call me a sleeper. I'm going to be looking at showing that I'm just as good as those five-star recruits and play at that level."

Then, there are also the inevitable Urschel Blocker jokes.

Luckily for John Urschel, it is Wallace who will be the most scrutinized scholarship offer of this class.  At the time of Wallace's commitment, the more cynical among us thought it was a sneaky way to land his high school teammate, Jelani Jenkins.  Unfair to Wallace?  Yes, but understandable.  Jenkins was a big fish.  One overlooked fact: Wallace is the cousin of former PSU defensive lineman, Terry Killens.  He's definitely a solid citizen, so let's hope he can eventually contribute on the field.

Brown was Penn State's lone Signing Day prize.  Although he strung out the recruiting process until the very end, Penn State was a clear, late favorite.  Scout and Rivals give Brown four stars, and Scouts Inc. (with free highlight video) raves about everything except his straight-line speed:

Shows good leaping ability and can catch the ball thrown over his head. Not afraid to go over the middle and will make the tough catch in traffic. Makes some spectacular catches look routine and will lay out and pluck balls that look uncatchable. 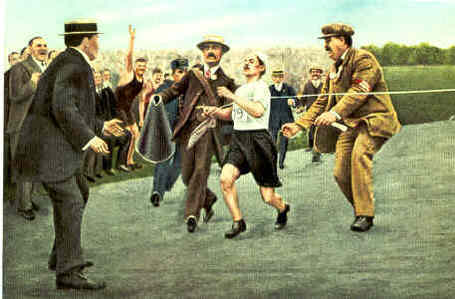