When they were down by ten points midway through the second half it looked like Illinois was going to run away with it. But Penn State hung in there.

When Illinois was awarded a basket after the shot clock expired to take a ten point lead with five minutes to go, and Jamelle Cornley was rolling around on the baseline with a separated shoulder, it looked like the game was over and Penn State was destined for the NIT. But they didn't give up. In the huddle during the timeout Talor Battle told his team, "We're not losing."

When down by one with ten seconds to go, Talor Battle tried to split two defenders to drive to the basket, but he turned the ball over. It seemed like all was lost at that point. Timeout was called, and in the huddle Battle told his teammates, "I'm going to make it up to you. I promise."

After the timeout, Mike Davis missed the front end of the 1-and-1. Cornley used his one good arm to pull down the rebound. He tossed the outlet to Battle who raced up the left sideline. He went around a defender. He cut to the middle to avoid a charge. He tossed up a prayer that kissed off the glass, bounced off the front of the rim, tapped the glass again, and fell softly into the net. And then... 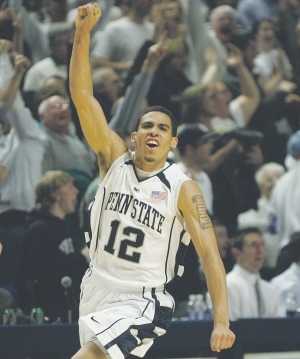 Though Talor Battle is getting all the praise for his last second heroics, Stanley Pringle was the MVP of the game. Every time it looked like Illinois was about to put the Nitts away, Pringle stepped up with a key bucket or a three pointer. He finished the game with 20 points on 8-of-11 shooting and a perfect 4-for-4 from the arc. He also finished with five rebounds, two steals, a block and an assist. Then he felt hungry and walked up to the concourse to get a hot dog. Hey, they were only a buck!

The free throw shooting was good all night, but it was superb down the stretch. Inside the last five minutes Penn State went a perfect 7-for-7 from the stripe. Danny Morrissey was particularly clutch hitting all three attempts when he was fouled on a three point shot. That cut the ten point lead down to seven and really sparked the frantic late run.

Jamelle Cornley was a warrior. He only scored seven points and seven rebounds, but he had to leave the game with five minutes to go due to a separated shoulder. He came back in after Andrew Jones fouled out and pulled down two crucial rebounds and played some monster defense against Tisdale in the final minutes even though you could tell he had no use of his left arm. There was no way he was going to watch the end of that game, his last game on his home court, from the bench.

The last minute heroics shine up the turd that was another lackluster game from Battle. He shot a horrible 1-for-8 from the arc, and there were several instances when he drove the lane and should have kicked it out to an open man instead of throwing up a desperation shot.

Andrew Jones fouled out with about four minutes to go in the game. I think three of his fouls were bumping fouls out away from the basket. It was a huge event because it forced Cornley to come back in the game. There was no way David Jackson or Jeff Brooks were going to stop Mike Tisdale down low.

The referees weren't giving Penn State much to work with in the second half. On one set of possessions, Ott appeared on replay to grab a rebound and dunk it home, but the refs ruled he grabbed the ball while it was on the rim and waved off the basket. Then on the ensuing Illinois possession Tisdale threw up a desperation baseline shot at the buzzer. It completely missed the rim, but Calvin Brock caught the airball and put it back up for a basket. Replay clearly showed the shot clock had expired while the ball was still in Brocks hands. This was a four point turn of events against Penn State.

My God the announcers were annoying. We were constantly reminded about how bad the first game between these two teams sucked. After each basket they had to express shock that these two teams are actually capable of scoring. And we were constantly reminded about Penn State's poor strength of schedule, and I can recall only once or twice where anyone with the WWL mentioned we have road wins at Michigan State and Illinois with a home win over Purdue.

What does it all mean?

Obviously this was a huge boost for Penn State's tournament chances. The general consensus among the talking heads is that if the season ended right now we're in. Joe Lunardi has us in as a #12 seed in the Midwest right now.

Obviously a lot can happen between now and Selection Sunday. First and foremost we have to keep winning, and that starts with Iowa at 2 PM this Saturday. Then we get the conference tournament next week. If we beat Iowa, and Michigan State beats Purdue, Penn State will unbelievably be the #2 seed in the conference tournament by virtue of the fact that we swept Illinois and have a win over Michigan State. In fact, let's just take a moment and enjoy this right here.

With ten wins, Penn State has clinched their first ever winning conference record in Big Ten play. For the first time in eight years, Penn State basketball is relevant in March. We're actually being discussed on ESPN, and it's not in reference to another horrid season.