To Rush or Not To Rush

Share All sharing options for: To Rush or Not To Rush 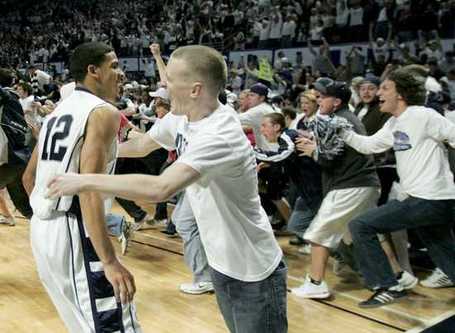 That is the question

Last night when Mike Tisdale's long inbound pass was harmlessly swatted away, the Penn State students rushed the court as college kids often do after a big win. This is a relatively new phenomenon at Penn State because, well, we haven't exactly won a lot of big games in our long history. So we find ourselves as a fanbase debating the proper etiquette when it comes to rushing the court.

This recent run of success can be traced back to last year's win over Michigan State. Penn State was muddling through another losing season. Geary Claxton was done for the year. They were riding a seven game losing streak and playing a top ten team. The general consensus was that the student were justified in rushing the court that day since it was just a brief moment of joy in an otherwise dismal season.

What's curious about that game was that it was the exact moment that expectations changed for this program. They didn't see themselves as losers anymore. Now they were capable of beating anyone and they believed it.

This season before the Purdue game at the Bryce Jordan Center, Jamelle Cornley strolled in front of the student section and instructed them not to rush the court if they win. He explained to do so would be disrespectful of his team as if nobody expected them to win. Would you rush the court with the threat of Jamelle Cornley ripping off your arm and beating you over the head with it? I don't think so. So when Penn State won, the fans complied and nobody rushed the court even though Penn State had just knocked off a nationally ranked team. So I'm curious why the Penn State fans, when after beating a lower ranked opponent, would rush the court last night?

Mob mentality is a fascinating thing to me. It's not like the student section took a vote with a few minutes left in the game. There was no polling. And there was no memo distributed to pass along the results. There was no traffic light telling the students if they should stay or if they should go. They just knew. But why didn't they know against Purdue? Why not when we beat Minnesota?

The answer, of course, is that it depends entirely on the situation. Who are you playing? What's at stake? How did it come about? What does the win mean?

Against Michigan State last year, the win was just an opportunity to enjoy a happy moment in an otherwise depressing year. Everyone knew our tournament chances were gone. The NIT was still an outside possibility, but not likely the way our season was going. So for five or ten minutes it just felt good to be a Penn State basketball fan. Then everyone went home and we went back to wondering what it would be like if we could pull off wins like that every night.

Last night was a different situation. I read a lot of message board chatter this morning about people saying it wasn't appropriate for the students to rush the court. They're saying we should expect to win games on our court, and the fact that the students rushed the court shows we do not expect to win these games and therefore we're not a very good team. UNC and Duke wouldn't rush the court if they beat a team like Illinois. The fact that we do speaks volumes about our program.

It was the last home game of the season against a ranked opponent with our tournament hopes on the line. There were three or four points in that game where we told ourselves we were going to lose. It was only for brief moments here and there where we found ourselves thinking MAYBE we had a chance to pull this out. Then in those last five minutes they started making plays and seemingly before anyone knew it we were in the lead and there was only a third of a second left on the clock.

Last night, storming the court was a celebration of a season. A celebration of achieving a goal. A celebration of putting years of frustration and disappointment behind us. Though there's one more game against Iowa, and the Big Ten tournament after that, those games won't be on our home court. This was the last chance the students had to rush the court, and last night it apparently felt right.