Jay Paterno And The Development Of Penn State Quarterbacks

Share All sharing options for: Jay Paterno And The Development Of Penn State Quarterbacks 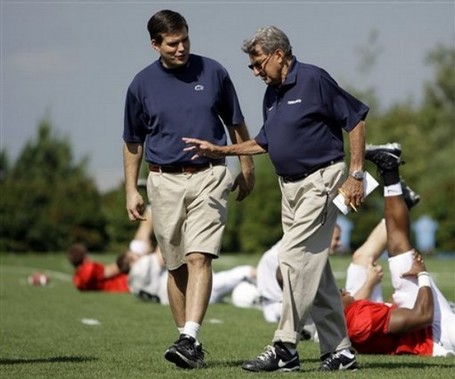 JayPa got himself a little press last week for leaking, on something I've been uncreatively referring to as "JayTweet", some of the Penn State kickoff times as well as a comment about November Big Ten night games.

Anyway, you say JayPa they say development, isn't that how the cheer goes?

So another primetime showdown between the Lions and Ohio State on Nov. 7 remains ... off the table? If JayPa reports news as well as he develops quarterbacks, we're going to say, "no."

While there is a lot of fair criticism of the Penn State offense over the past 5-10 years, I don't quite understand why this "JayPa makes quarterbacks worse" thing gets passed around with such a large amount of assumed truth.  I'm not here to claim he is a football genius or anything, but when you take a second to look at what he's done...

The first major JayPa project we'll look at is Zack Mills, and if you want to describe his career in one word it would probably be "hurt".  Or maybe "shoulderless".  I think "competitor" is a close second, I mean the guy never gave up, but he also almost never played healthy and took more brutal option hits than even a full sized running back ought to.

More on Mills and the rest of the quarterbacks after the jump...

We could look into the numbers here but anyone who watched the bear fight that was these four years will probably agree there was simply too much else going on to blame the lack of offensive production on a quarterbacks coach (mainly injuries, injuries and lack of talent; take your pick, really).

The next "project" was, of course, the development of Michael Robinson.  MRob was forced into exclusive QB action during the 2004 season because of, as you know, nagging injuries to Mills.  While he had just 34 attempts that season, his lack of practice at the QB position showed:

In a word: awful.  But that wasn't his position, he practiced all spring, summer and fall at WR and RB, not QB.

So when Mills graduated and we were looking at starting three freshman wide receivers, most fans simply assumed highly recruited Anthony Morelli would take over the reigns and Robinson would line up as the only experienced receiver.

I had little faith, of course, and can still clearly remember a strong negative reaction after reading this quote in the paper, given right after the bowl-less but upbeat ending to the 2004 season:

His part-time position coach, quarterbacks coach Jay Paterno, also said M-Rob at quarterback is the plan for the 2005 season. Then, he hedged on that a little.

It seemed foolish at the time.  He wasn't a very good quarterback, but did well when he got the ball other ways.  Morelli had a strong arm and high school passing records the 1995 NFL Punt, Pass, and Kick Championship trophy, so why leave him on the bench?  Anyway, JayPa knew something I didn't and the results were, as you might remember, impressive:

So, yeah, he developed to the tune of more than doubling his yards/att (ranking 39th in the nation) and raising his rating 230%.  Keep in mind he did this with three freshman running most of the routes.  Credit who you want, but there is nothing in those cards that indicate Jay Paterno can't teach the quarterback position; in fact it suggests just the opposite.

Now the painful part: Anthony Morelli.  A highly sought after five star quarterback, he came to Penn State with the hope of following in the tradition of some of the great QBs who have also come out of Western Pennsylvania.

After MRob left the team with a BCS bowl win and ranked #3 in the nation, Morelli had supposedly made great strides on the practice field and was ready to lead the team to a repeat Big Ten championship.

I'm not going to revisit these two awful years of What Could Have Been, but I will share some observations and quotes that I think tell the story.

The rumor on Morelli, one we heard during his recruitment right up through the end of his career, was that "he couldn't read defenses".  The problem was much bigger than that, though.  Despite two full years of starting under center, Morelli never seemed to be able to check down his receivers.  He often would gun the ball into triple coverage for no reason at all.  Any rush past the line of scrimmage that didn't end out of bounds ended with a fumble.  For an offense that relied heavily on the screen and bubble pass, he had zero touch on the short pass and would often through quick slants about 40 mph too fast.

These things never seemed to go away, and I think this is where the JayPa can't develop quarterbacks thing started.

Morelli graduated and, while prepping for the NFL draft, was tagged with this tidbit from former pro scout Tom Marino:

He has all the tools you look for in a QB; an athletic body, very strong throwing arm and far better movement then I had expected, but is acutely under coached and unprepared for the job of being a professional QB.

And...ouch.  The phrase "acutely under coached" is about as broad a shot as you will hear a scout take.  After four years working with the kid, despite having what the scout certifies as "all the tools", he doesn't know how to be a quarterback.

Well guess what, he went to the NFL, was picked up by the Cardinals because of the same promise that Penn State saw in him during high school, and despite being taught by the best in the business, still couldn't pick up the mental tools.

Blame JayPa if you want, but when Morelli was cut before even making it to the regular season I think it fair to assume that if NFL coaches couldn't teach him the skills despite having certifiable tools, Jay Paterno probably gets a bit of a pass on this one.

Let's move on to Daryll Clark.  Rated as a fairly average three star quarterback by the services and listed as the 24th best 'dual-threat' QB on Rivals, he wasn't heavily recruited and actually made a visit to Toledo.

Someone, I'm not saying who, saw something other schools didn't:

Quarterback coach Jay Paterno had noticed Clark, from Youngstown, Ohio, while watching video of a tight end. Clark acceded to Joe Paterno's demand that he spend a year in prep school to shore up his academics. His grades had scared away many schools.

"He said to my parents, 'Grades don't show what kind of person he is. We want him to play quarterback,'" Clark said.

More from Clark (emphasis mine):

"Those guys took a chance on me," Clark said of the Nittany Lions.  "They talked to my parents personally and told them how they wanted me, why they wanted me, what type of person they think I am. That really meant a lot to me because no other coach did that. Once (other schools) saw the grades, they went away."

While Clark spent most of the 2006 and 2007 seasons on the sideline, he apparently was being taught something.

Clark was rated below QB's that ended up signing with (amongst others) Troy, Chattanooga, San Diego St. and Northern Illinois.  His development from high school mediocrity to DC17 led to this stat line:

And being recognized as the best quarterback in the Big Ten.

So this turned into a much longer analysis than I expected but it is also probably the first time anyone has looked at the four quarterbacks Jay Paterno has been in charge of teaching collectively.  Despite unqualified and repeated shots at his ability, there is actually quite a bit of progress made in the examples above.

Robinson was, without question, a complete success and showed incredible improvement once JayPa was able to actually spend time with him as a quarterback.

Clark, who most schools thought lacked both the talent and brains to make it as a QB, was turned into the best quarterback in the Big Ten after just two years with JayPa

After having a chance to sit back and look at the Mills and Morelli years, I am under the impression that the lack of progress here was more or less outside of a position coach's control.  I understand this could be up for argument, but even if you completely disagree with that conclusion you can't deny the success of MRob and DC17.