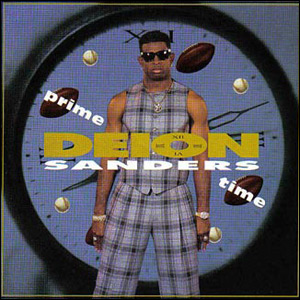 Well It Worked For Deion Sanders. Something stuck out to me after reviewing the primetime games:

Guess what isn't prime time? 3:40 PM ET. That's not even dinner time. In fact, there are days where I have a lot of work to do and don't even finish my lunch by then.

I know everyone wants a prime time game, you can call it that and get the fans all riled up...maybe even advertise the game with one of those awful cliche/puns college marketing people love so much.  But at what point are these minor delays simply PR stunts?

And one more thing about night games, since I'm slowly turning on them: in a lot of ways the team is getting less publicity. The Big Ten's contract with ABC says that, if you get their noon or 3:30 slot, you are either on ABC or on ESPN2 in the rest of the country. Put another way: game = televised in every state. The Big Ten doesn't get that guarantee in prime time, and with sometimes a dozen teams playing on any given Saturday night, the game very often won't even be broadcast outside of The Footprint.

In spite of ourselves. As we continue OOC SOS Week here as BSD, we should probably touch on Rivals' yeah we knew that already story:

Big Ten: Big Ten members are playing nine games against FCS schools, the same number as last season. Ohio State and Purdue are the only league teams not playing an FCS opponent. League schools are playing 14 non-conference games against other "Big Six" schools. Of note: For the third time in four seasons, Wisconsin is playing zero non-conference games against other "Big Six" schools. The Big Ten is tied with the Pac-10 for the least number of road games – two – against non-"Big Six" opponents.

They don't actually mention PSU in the wrap up, but do note the small list of teams that scheduled eight home game this season (stadium capacity and national pro+college ranked added by mua, per wiki):

So that is three of the top four stadiums taking advantage, an economic factor that even JoePa admitted in his presser yesterday. Ohio State plays in #3, and while they only have seven games at The Shoe this year, they play Toledo 'away' at Cleveland Browns Stadium (73,200, #34) as what you could consider an 8th home game.

About those rare quality OOC games. Scout has your list of the best in the Big Ten this year:

Okay, this goes on to 10 but I'm not wasting SBN server space on the rest of it; in fact I really should have cut this thing off after #1.

The good news/bad news of having Notre Dame as two of your top four "toughest" OOC games is that they are going to ride a hype train like you haven't seen since, well, the 2005 ND team did when they turned the Bush Push into the single most beneficial loss in the history of sport.

The Nittany Line points out ND's inclusion one of those of the so you're saying there's a chance lists, which is a direct result of a schedule that includes Washington and Washington State, amongst other cream puffs disguised as the lowest rung of BCS competition.