Cael Sanderson And The Post-Paterno Era

Share All sharing options for: Cael Sanderson And The Post-Paterno Era 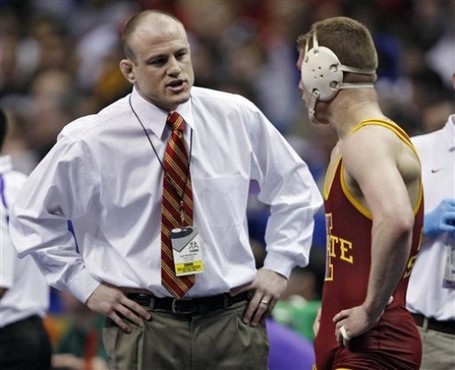 Cael Sanderson is now the wrestling coach at Penn State, you might have heard because despite college wrestling being off the radar in most of the country, it was still picked up by USA Today, papers all over IA and PA, and for some reason, the Denver Post.

There are two interesting things about this, and reasons why even you, Penn State Is A Football School Fan, are interested in the story.

One. Cael Sanderson is, as they say in San Diego, the balls.

The short list goes like this: his four-year record as an Iowa State wrestler was 159-0 -- you probably figured this out, but that was good for four individual national titles. Two years after graduating, he went on to win a gold medal in the Olympics, then went back to his alma mater to coach the sport he dominated.

Two. The Indy Star reports that Iowa State's athletic department budget is only $29 million, yet they employed the highest paid wrestling coach in the nation.

So when Troy Sunderland resigned after a disappointing season, Tim Curley did the exact opposite of what I expected: he called the biggest name he could find, who was also making more money than any of his peers, and offered him a raise. Not exactly the approach he took with DeChellis, and not exactly what anyone is expecting when the time comes to hire a new football coach.

The kicker is that the guy has zero ties to Penn State, other than winning one of his national titles while it was hosted at the Jordan Center, but was simply the best available candidate.

There is wild speculation that Cael is making "a million dollar(s)", but the man himself is claiming to have accepted "less then a 10% increase" in salary*. The rumors were more along the lines of this: 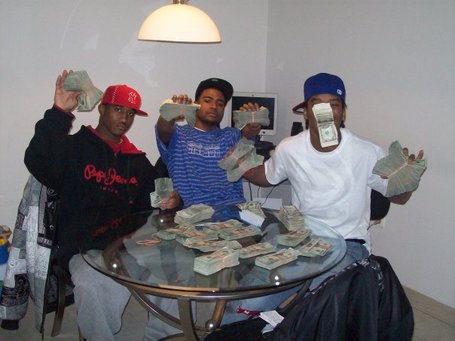 RUTS pointed out via email that there may be endowment or booster money here, dollars that wouldn't show up in his true salary, highly possible but also difficult to determine.

So finally getting to football. I was pretty excited about this because, even if TB or LJSR are up to the task of successor, it means the AD might at least go after a hot shot and maybe even pay him something along the lines of market value. Spanier has insisted over and over again that an SEC-salary coach isn't in the cards, but, I mean, if we'll do it for wrestling...

But then my right brain kicked back in. Ten percent of $110K isn't much, and even with the raise, Paterno is still making over four times that -- making four times that, and considered the best deal in college football. Take 10% of one of the top go-getters in a revenue sport (Saban, for example, who's making around $4M), and that is still three times what Cael is going to pull in at his new gig. Just as a raise, remember. Even with donor money on top, wrestling coaches aren't exactly the target market for Rolls-Royce.

Besides, there is interesting yet admittedly circumstantial evidence that the AD Jamie Pollard isn't the easiest guy in the world to work for. The rumor I found on Clone Chronicles was that Cael didn't even let ISU counter-offer, which seems to be in line with Pollard's comments during the Chizik debacle, specifically the one about how the former Cyclone football coach wouldn't respond to calls to text messages while being courted by Auburn.

Pollard after the Cael to PSU announcement:

In the end, Cael said that he appreciated everything Iowa State and our fans had done for him but he believes winning a national championship will be easier at Penn State

I doubt the direct quote was 'easier', but when you get dumped that hard it's easy to misremember things. Cael responded on his blog with the high rode, but as said best by Clone Chronicles:

I guess what I do not understand is that if you love ISU so much, think that Jamie Pollard is a great AD, then why do you leave? He said he got less than a 10% pay increase from last year, it clearly isn't about money (if he's telling the truth).

For those of you who do want to know the actual wrestling implications. Cael made a DWillesque comment on his blog, explaining that "[t]he opportunity to step in and awake a sleeping GIANT is exciting." and "[t]he potential is unbelievable"; the first sentence is coachspeak but the second one is probably true. Why? Well take a look at these numbers I shamelessly lifted, unverified, off of the comment section at BHGP:

I also urge you check out The Official Unofficial Source Of All Thing PSU Wrestling(R), Galen@TNL, who writes about the team even when they aren't in the USA Today. And yes, that link comes free with a dancing monkey.