BSD insta-legend Reading Rambler flagged this Boiled Sports post deriding Penn State fans for being excited about our NIT Championship.  The only way that the BS post could be any more of a transparent plea for attention would be writing "ERIN ANDREWS DONKEY SHOW" in the title, but let's give them some attention anyway, in the form of the Fire Joe Morgan treatment.

First, there is nothing more deliciously ironic than having a Purdue Boilermaker fan lecture you on the topic of irrelevance.  After all, Purdue is the school most people can't remember when trying to name all eleven Big Ten conference members.  Indiana has the chair-throwing guy with the red sweater, Michigan State has PUCKER PUCKER PUCKER, Northwestern has the smart kids, Iowa destroys our dreams on a semi-annual basis, and Purdue...what, trains?  Combovers?  Oatmeal?  Mascot that looks like a pedophile?

Some friendly advice, when your claim to fame is a giant drum, keep the relevance barbs to yourself.  And really, after years of the national media bagging on the Big Ten as playing plodding, Neanderthal basketball, can't you just be appreciative for us bringing a miniscule amount of positive attention to the conference?  It's not like anybody is asking for a parade here.

No team wants to be in the NIT, especially a team that went 10-8 in a major conference.  It's an obvious point to be sure, but a fact of life for a handful of bubble teams every March.  Just as football teams who barely sneak into crappy bowl games benefit by having extra practices, young basketball programs can benefit from the extra practices, games, and tournament atmosphere provided by the NIT.

...don't kid yourselves- outside of the PSU family, this "tournament" run was unimportant.

Boiled Sports is responding to one overly emotional postgame post over at NWO.  Nobody.  Else.  In the.  PSU blogosphere really thought it was more than a Little Big Deal.  No reasonable person is confusing this with the Final Four.  Nobody expects UConn fans to care about it, or for it to be the lead story on SportsCenter.

Even big sports fans don't care about the NIT because they understand how watered-down a championship (in name only) from this tournament is. I think it can be fairly argued that a pre-conference NIT championship is more important to a program than the post-season post-season variety.

There are teams that might benefit from such a run- young teams that are trying to get their legs under them might learn what it takes to be a champ from this tournament played in the gaps left by the NCAA tourney...in theory.

Anyone who can decipher those two paragraphs wins a cookie.

But, outside of Memphis and Wake Forest, no programs have gone on to "greatness" the next season because of the momentum, knowledge or team unity gained in this tournament. In fact, NIT championships for Michigan did little more than stunt the growth of their program and push them to set the bar ever-lower.

Okay, I understand this paragraph -- It's just unforgivably stupid.  Under this theory, Michigan winning the 2004 NIT actually caused them to suck in 2005 and beyond.  After celebrating in Madison Square Garden, Tommy Amaker went back to the locker room and apparently thought, "You know, this is GREAT.  I'm going to go out of my way to be a mediocre coach, and we can do this every year!"

BS throws out a token compliment -- there's a rather hilarious "but we said nice things about you!" backtracking in the comments -- before going back to the "nobody cares outside of State College" line, and uncorking a beauty:

Penn State did belong in the real tournament more than many teams that got in, PSU was a good team in '08/'09. That said, the last few victories don't help this team's resume or their legacy to the world outside of State College, PA. In fact, they might even cheapen the quality wins versus MSU, Purdue and others that occurred when something was actually on the line and all parties were playing as if their lives depended on it.

That's right, kids, Penn State beating George Mason, Rhode Island, Notre Dame, Florida, and Baylor makes Penn State and its previously victories look worse.  If Penn State had only lost to George Mason in the first round, we could look back at those wins over Sparty, Illinois, and Purdue with pride.  With this line of thinking, the NIT not only makes your program less ambitious, it actually invalidates your previous wins!  Oh, and it gives you herpes.

And incidentally, this is the face of somebody playing as if his life depended on it: 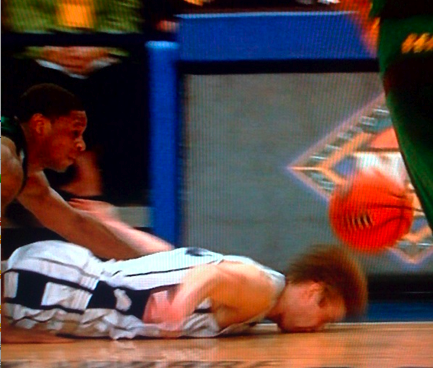 Penn State doesn't exactly have a rich basketball history.  It's not even close to Purdue's tradition, which we hear a lot about even though they've never actually been to the NCAA tournament finals.  (The Chicago Cubs have a rich baseball history too, I suppose.)

Look, our family's pretty big, and it's not just due to Deep Fried White Castle burgers in the Beaver Stadium parking lot. We'll celebrate anything, and to see this team succeed after suffering through a string of 1-15, 3-13, and 2-14 Big Ten seasons is very important. The team and fans faced up to their Selection Sunday disappointment and turned it into something positive, and it'll have more of a long-term benefit for the program than a first-round NCAA loss ever could.

Penn State's young players got much-needed national television experience and played in some great environments. Andrew Jones, David Jackson, Chris Babb -- players we desperately need to be good next season -- visibly improved against good competition.  Next season, we'll have more games on ESPN and less on the Big Ten Network.  Ridiculous as it may seem, this is no small accomplishment for a program gasping and competing for national attention.

Perhaps most importantly, after years of being crapped on by a combination of Jerry Dunn's coaching incompetence, countless player defections, and a heaping amount of institutional indifference, our fans finally had a reason to believe again in the basketball program.

That's why the NIT matters.