Pete Fiutak has had enough and he's not going to take it anymore! He's tired of your traditions, your history, your desire for variety; enough is enough he tells ya, enough is enough!

Okay, I'll save the fisks for another day, but it's getting late and something needs to be put to bed:

More after the jump...

Why a lack of "gimmicky" scheduling means a change is in order might be a commentary on the sad state of our now TV driven football, but I can't stress enough how completely (1) unrealistic, and (2) boring a Big Ten round-robin would be.

I'm pretty sure this same article is published weekly by football writers from every city except those within The Footprint. It takes a certain amount of ignorance, usually fueled by the champ games of the South and East or seemingly complete schedules of the West, to look at the Big Ten and conclude things aren't being decided "on the field".

But everyone else, with their fully weaved web and gimmicky championship games...they know what they're doing! 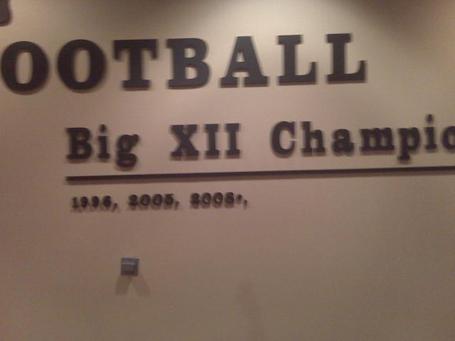 That's right ladies and gentlemen, as you may have heard Texas has literally and with shaped numbers claimed the 2008 Big XII Championship. Never mind that they didn't even win their own division (a title decided by a round-robin!) and therefore didn't even play in the conference championship game; if it says so on a wall it has to be true. Alabama would be proud.

So since teams who don't even play in the title games can somehow win entire leagues, there must be something to this whole full-on, round-robin thing everyone pats the Pac-10 on the back for putting up with.

Well I guess that's the ticket then, you just play everyone and then there is no possible situatio-- what?!

The nine game schedule didn't start in the Pac-10 until 2006, the first year of this screen shot. Now, you're thinking "head-to-head!" and yeah of course there is head-to-head, but the possibility for a three team tie is still highly likely (see above, the 1996 Big East standings, or the 2000 Purdue team). And besides using tie-breakers, however simple, still compromises the process.

And then there is this: the season would be boring. Purdue, Michigan State and Michigan are unlikely to give up their games with ND, even with the OOC reduction, meaning they will play literally the same exact schedule each year save one interchangeable I-aa program. The rest of us would probably end up with even less, getting perhaps one decent OOC game every couple of years...all so we can get the SOS boost from Northwestern and Indiana.

Enter shortsighted comment that assumes we know who is going to be any good this year (background: we don't), and that it will all lead to disaster:

This year, Michigan, who always has to play Ohio State and Michigan State, misses Minnesota and Northwestern, while Purdue gets to bypass Iowa and Penn State, two of the main contenders for the Big Ten title. Illinois doesn’t have to play Iowa or Wisconsin, the Badgers miss Penn State, and worst of all, Michigan State and Ohio State, two of the four best teams in the league this year (Penn State and Iowa being the other two), don’t play.

While it is a shame that not everyone can play everyone all the time (Carl Sandburg said that), a quick look around suggests it won't actually solve anything (I said that).