Share All sharing options for: Sending Subliminal Signals In Our Nation's Capital 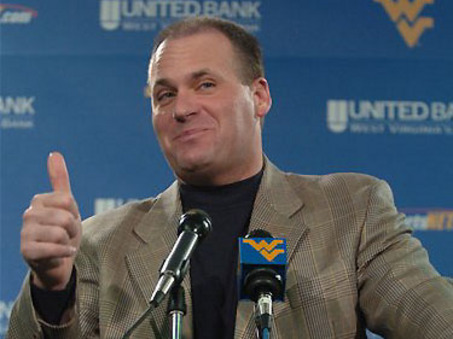 The Knight Commission on Intercollegiate Athletics, which works as a kind of fun police for BCS football programs, continues their claim that college football will ruin us all:

"We need to do more to make NCAA data clear and transparent to university trustees, alumni and the general public, so they can have a better understanding of the fundamental problems," Kirwan said. "Better data and more transparency help us debunk the myths that have led to excessive spending on coaches' salaries and other areas of intercollegiate athletics."

Okay, never mind.  I actually kind of like this idea.  The report cites the NCAA statistic that only six D1 athletic departments made money last year, a number that is completely meaningless because each one calculates their revenue, fix and variable costs differently.

They are hard-line against excess spending on football and basketball, though, which is downright un-American.  Or is it?  They asked Penn State's Tim Curley:

But you have to leave the press release* and go to an actual newspaper (kind of) to get real quotes:

"The economic realities facing athletics will have a major impact on sponsorship and participation in the years ahead and, without changes, the number of sports will be reduced, mostly at the men's Olympic-sports level, many of which could return to club status," Curley said.

But this gets even better: to understand the full story you have to go to a third source*, the AP (which I can strangely only find on the website of a Mobile CBS affiliate).  The Knight Commission has been occasionally suggesting that congress or some other governing body should step in and cap coaching salaries to control costs.  Curley (at the same meeting, from what I can tell) is on the other side of the fence this time:

This is really interesting.  Penn State pays their head football coach an incredibly cheap $500K per year.  RichRod is making $2.5 million, Ferentz is making something like $2.84 million, and JimmyVest is at or around $3.5 million.  Why would Curley want let these schools pay some of the highest salaries in college football when he knows he has another 2-4 years left of Paterno at a fifth of that and a very good chance of getting Bradley or LJSR to take over at something comparable?

It doesn't make much sense, especially for a guy who is self-funding his entire department, unless he isn't so sure about (1) wanting to promote one of the assistants to HC, or (2) being able to retain them for such a low salary.  The other side of this is that, if it come down to it, Penn State could compete in a bidding war with just about anyone right now, and probably win 98% of the time.  It's not a bad option to have in your back pocket.

Note: if you are tired of hearing me comment on the news industry just skip the footnotes.  I understand.

*Although what is really sad here is that it's not a press release at all; the first story I linked has a byline from Kate Hairopoulos of The Dallas Morning News, on the website of The Dallas Morning News.  She drops a couple of really insightful things like, "Just don't know that there's much anybody can do about it." and then literally copy/pastes the entire press release.  Here is some free advise for newspapers: that isn't the model of the future.

**Long live the aggregator, i guess.